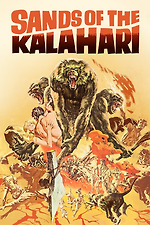 Sands of the Kalahari

This would make a great double feature with The Naked Prey. Both find a group of white Europeans stuck in the hot African sun, forced to confront the brutal realities of their world. For the most part, this concerns violence and the parallels between man and the beasts that roam this land. In The Naked Prey, it is the destruction of the hunter-vs-prey dynamic with Cornel Wilde turned into the prey for an African tribe who seek to kill him. In The Sands of the Kalahari, after a plane crash drops them in the desert, a group of six people are forced to realize what they will and will not do in order to survive. With baboons, tortoises, and other African wildlife abounding, there are plenty of food choices but, as they will learn, those baboons are a bit too similar to them (and not just as food). This is a brutal and violent survival thriller, finding five men and a woman confronting the beast within them.

After the success of Zulu, it is no wonder that Cy Endfield was immediately handed the directorial duties of another film with an African shoot. Though he did not get his intended casting of Richard Burton and Elizabeth Taylor - which certainly would have helped this film have a higher profile over the years - he did get a strong cast nonetheless. Stanley Baker reunites with Endfield after Zulu, appearing as the injured Mike Bain who slowly, but surely, regains his strength and must stare down the dangerous O’Brien (Stuart Whitman). Having taken on the role of hunter for the group, O’Brien’s drive to survive has led to him being willing to force others to leave under the guise of finding help. Baker is a strong presence here, as is Whitman who really captures that unhinged and repressed animalistic nature of man. Susannah York also appears as Grace Munkton, serving a larger purpose in the film than many other characters, something that York handles quite well.

That purpose being what one immediately expects: a desired woman. Grace is fine with the attention, as she herself is attracted to some of the men. York is strong in the role, capturing strong emotion as Grace is torn in different directions and is faced with horrible violence. Men such as Sturdevan (Nigel Davenport) are intent on being with her, even if it is by force. Her desires lead her more to O’Brien - perhaps some comment on the masculinity he puts forth in his willingness to kill? - and, later on, Mike. It is a perfect encapsulation of how those animalistic tendencies extend beyond violence. Sands of the Kalahari is largely focused on the violent side, hammering home ideas about one’s willingness to kiss and flat-out arguing that bloodthirsty men like O’Brien are not too far removed from the general society. However, Grace and the sexual commentary adds another layer to this wickedness. She is constantly in peril, being watched by men and fought over as a symbol of who is “king” of the group. Whoever believes themselves to have this crown, quickly makes a move for Grace and aims to make her “their’s” as a symbol of that power. It feeds further into the toxic masculinity on display, as men aim to demonstrate their power in a constant struggle to survive, pitting themselves against one another rather than helping each other.

The animal violence is certainly a bit much, whether it is real or not. It is hard to tell - the fact it is a British production makes me believe it is not, considering their animal cruelty laws; though, some scenes were cut by the BBFC - but it is a constant factor. They kill literally anything they can get their hands on, showing O’Brien shooting many baboons over the course of the film. The same is extended to zebras or even komodo dragons with the group doing whatever they can to survive. Yet, there is an imbalance being created. They may be the hunters, but as Grimmelman (Harry Andrews) says, the baboons are not too far removed from man. This applies in the animalistic nature, but also when it comes to justice. O’Brien’s brutality towards his fellow man and to the baboons - often excessive, crossing into cruelty as he sees them as rivals as much as possible food - must be repaid. The film’s brutal and violent final scene finds O’Brien battling these baboons, ominously being encircled by them and taking them on one-by-one as the film fades to black. Alongside examining the barrier between man and the beasts, Sands of the Kalahari is interested in this karmic balance of the world. Mike and Grace are, relative, innocents. Even as O’Brien kills everyone and hunts them, they retain compassion towards him and worry about his safety. They are not dragged into the same kind of bloodshed that O’Brien propagates. Thus, they are given a chance to start anew. O’Brien is not given the same. Instead, he must reap what he has sewed and face down those who have born the brunt of his anger.

While not quite as strong as Zulu, Sands of the Kalahari is a solid survival thriller that drives at the wickedness of man. Using this small collective as a microcosm of a larger systemic issue in society, Sands of the Kalahari feels rather ahead of its time. It examines the core of toxic masculinity and the dangers women (and competing males) face when confronted by a supposed “alpha male”. Strong performances, cinematography, and solid direction help further, resulting in an engaging and tense work.

Panic in the Streets