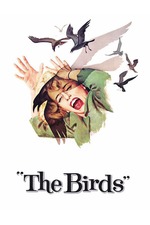 As someone who is deeply grossed and freaked out by birds, Alfred Hitchcock's The Birds is a tough watch. Many people need to be convinced that something is wrong with these birds in order to believe that they are vicious killer. Not me. I know that they are merely rats with wings who should be exterminated just like the vermin they really are. Personal prejudice aside, of course, birds are vile creatures and Hitchcock's film pulls back the veil to reveal the true, heinous, and cruel nature of these beasts. Starring Tippi Hedren and Rod Taylor, this film is showing its age spots with some questionable bird effects. However, the fear it conjures will never age with terrific sound effects and a terrifying premise sure to continue to sway public opinion against birds for the rest of time. It is only through public service announcements such as this film that the birds will be defeated and I encourage everybody to watch this fatally important film.

With relatively solid performances from Hedren and Taylor, with moments where they slip into B-movie quality acting, The Birds is a terrifying film. Telling the story of birds who attack a small coastal city in California named Bodega Bay, the film is very much one about fearing the unknown. With many people not knowing that birds act like this, it takes everybody by surprise in the small town. However, Hitchcock was one of the first people to really give birds credit for how smart they can be, as though birds admittedly do not attack people, they also peanuts for brains. The scenes of attacks are always incredibly menacing, but are bolstered by the sound. Sometimes using a suspenseful and thrilling score, the film equally relies upon absolute silence aside from bird chirps. With the film laced with bird chirps throughout, Hitchcock replaces "what goes bump in the night" with "what goes chirp outdoors". Constantly surrounded by these violent aviators, the characters in The Birds have nowhere to hide, as shown the sound effects. No matter where a character goes, birds follow. If there is silence, it is purely an indicator that things are set to get worse at the beaks of these winged demons.

The "master of suspense" is in complete control throughout creating a thrilling atmosphere throughout as a result of the aforementioned score and bird sound effects. Lacing every movement with incredible amounts of dread, it leaves the audience wondering where the next attack will come from. The film also introduces some surprising gore with characters being pecked by birds, including small children, and a man having his eyes plucked out of his head (we only see the aftermath). Shocking for the time, this film had to have really stunned audiences in 1963. In 2017, the film is still shocking with Hitchcock unafraid to put his stars in imminent danger and creating a well paced and thrilling film. Always leading up to the climax, the build-up of the film sets the tone and the scene perfectly and the pay-off of the film is terrific as it pits Melanie Daniels (Tippi Hedren) and Mitch Brenner (Rod Taylor) right up against the assailants from hell.

Of course, the film has aged with the acting slipping into too much melodrama at times and the bird effects being quite lackluster. You can always tell they are puppets and it is quite jarring and near comical at times to watch. Of course, the good part is that Hitchcock's penchant for suspense has not aged, thus even when the effects fail, the atmosphere and tension never cease. That said, it is worth noting as the film may fail to scare some audiences due to these aged special effects. If you are able to suspend belief a bit and just go with it, however, then the film will remain as terrifying as ever.

The Birds also further dives into Hitchcock's Oedipal obsession. Psycho is well known for this with Norman Bates embodying both himself and his dead mother. The Birds, however, certainly has a lot of this as well between Mitch Brenner and his mother Lydia (Jessica Tandy). Disapproving of every girl Mitch dates, it is speculated that Lydia is afraid to be alone and Melanie declares that Lydia is possessive of Mitch. Oedipus is even referenced in the film in regards to the relationship Lydia has with Mitch, especially after the death of her husband and Mitch's father. While her fear of abandonment is pretty common, it is worth noting and shows Hitchcock's interest in examining the subject. Honestly, the film could be seen, to a degree, as being a depiction of Lydia fighting against Melanie, who Mitch fancies quite a bit. Though the birds attack other people as well, its kills include an ex-girlfriend of Mitch's. Additionally, they only begin to attack once Melanie shows up in town. It may be coincidental, but the birds also specifically begin attacking her and are constantly showing up wherever she is. Of course, she is the star, so it is possible there is nothing here, but it strikes me that Hitchcock may used the bird attacks to symbolize the motherly instinct to attack and reject the woman her son loves. By the time Lydia begins to accept Melanie towards the end of the film (following the final attack on her), the devious animals have ceased attacking and are instead just gathering and waiting for the next victim. As such, it can be surmised that Lydia has accepted Melanie and no longer has it out for her.

A terrifying classic of a horror film, The Birds may be a bit dated for some, but for those willing to indulge its 1960s horror instincts, it is a deeply rewarding film. Scary, suspenseful, and thrilling, The Birds reveals the true nature of birds to the viewing public and needs to be heeded as the warning that it is before it comes to life. Birds must be stopped, one way or the other.