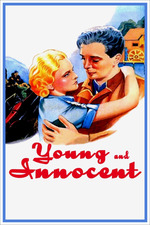 Alfred Hitchcock loved making films about innocent people accused of a crime and Young and Innocent is yet another example. A violent argument between the victim and her ex-husband opens the film, tipping Hitchcock’s hand as to where this will end up. A day after the argument, Robert Tisdall (Derrick De Marney) goes about his day and, as he walks by the seaside, he sees the body of famed actress Christine Clay (Pamela Carme) on the beach. Rushing over to get a closer look, he quickly realizes she is dead and runs off to get help. Unfortunately for him, two women are passing by and see Robert running away. As the cops arrive, they are quick to point the finger at him and shout down any of his attempts to explain why he was there. Worse for Robert, he knew Christine and was even in her will as the pair worked together on films. Now, with his back against the wall, he will find an unlikely ally: Erica Burgoyne (Nova Pilbeam), the daughter of the local constable.

What bothers me about Young and Innocent is right there in the opening: how he is pinned as the murderer. Two women saying they were there first and that he was running away not getting help is flimsy evidence (it is essentially "he said, she said"). The only physical evidence is a jacket belt that does belong to Robert, but comes from a jacket that was recently stolen. These two bits of - what is described as - “strong” evidence are enough to have Robert doomed. He is set to go away for life, if not killed, because people disagree over who got to the body first and because his belt happened to be the murder weapon. The fact he knew the victim and is in her will only seems to damn him further with nobody entertaining the possibility of his innocence and his lawyer being woefully incompetent. This is all pretty typical for scenes where someone is railroaded, but the way the film pretends it is an airtight case when there are loads of possible holes is odd. It feels rather half-hearted, just throwing together a loose collection of supposed evidence and then blaming Robert to get the film’s events kickstarted. In the same vein, by the time the real killer is found, Hitchcock wraps it up as rapidly as it is set up. There is no prolonged interrogation, as the killer just sits there and says, “Yeah I killed her,” which is a tad absurd.

Despite this rather half-hearted mystery side, Young and Innocent is nonetheless suspenseful. Hitchcock was obviously known for this and shows why in this film. Stringing together this loose plot and this odd couple, he somehow manages to wring suspense out of them merely driving across the English countryside. Every turn, every hitch in the road, and every stop, is laced with the fear that Robert could very well be identified by anybody they pass. Building this suspense over the course of the film, Young and Innocent finds Robert with his back against the wall while Hitchcock introduces constant close calls. A scene at the mill is an especially tight one with the cop going one direction while Robert and Erica make a run for it through a window. As the film barrels towards its finale, some neat figurine replicas of the them on a trainyard (cutting between the rather obvious figurines and real shots) give them some close calls with a train, and a scene in an old mine finds some great special effects deployed. Even the more low-key scene at a restaurant as a man tries to identify the real killer (who had given him Robert’s jacket) finds Hitchcock slowly building suspense, cutting between the increasingly nervous killer and the man scanning the room for him. While perhaps not offering Hitchcock’s finest plotting, Young and Innocent classic Hitchcock suspense keeps it as a gripping, nervy affair that keeps the audience constantly on edge.

The film benefits from the pairing of Nova Pilbeam and Derrick De Marney in the lead roles. Neither are phenomenal, but both turn in good performances while, importantly, selling the quick emotional ties between their characters. The writing is a bit rushed in this area, putting them together as Erica sees the accused Robert and begins to feel sympathy for him for little-to-no reason. Nonetheless, Pilbeam and De Marney quick chemistry together, makes it work alright. A real highlight here comes as they stumble onto birthday party of Erica’s cousin. Playing off on another and providing some nice comedy as they try to avert disaster by being recognized, the scene is a tense but relatively lighter affair that is incredibly fun to watch. Pilbeam is especially impressive on her own in scenes at her family home, awkwardly working her way around her father’s obvious judgment. As she silently tries to keep her cool at the table and then confidently walks into her father’s office, Pilbeam has a great cool, focused, and reserved nature that works to her benefit in this role.

Though a lesser Hitchcock, there is a lot to like in Young Innocent. Gripping suspense and a pair of strong lead performances are two marks in its favor, even if its mystery setup and resolution are woefully underwritten. Nonetheless, it is another entry in Hitchcock’s beloved “man wrongly accused” theme and, while he would execute it with more precision in later efforts, Young and Innocent is a solid and engaging film.