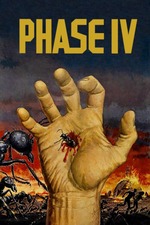 Phase IV is movie about a disaster but fortunately it is not a disaster of a movie. In fact it is a very important one.

What one expects from Phase IV is a cheap knock off movie about ants killing humans in style of the 50s early sci fi flicks. Generally these movies are tricky to get them right as far as quality is concerned. Usually, the budget isn't enough so what we get is a cheap looking flick. Now this isn't damning per se, as there are examples of those cheap 50s flick being nothing but solid. Phase IV is one of those movies where the budget is pretty tight, but the final result is an indicator of how skilled those who worked on it are.

Phase IV keeps it simple. It's essentially two actors in a confined space. The crafty Saul Bass, whose filmography unfortuantely spans only a couple of short films, uses truly striking imagery, sequneces of image and sound creating a psychedelic atmosphere in the likes of 2001: A Space Oddysey. The editing is absolutely phenomenal with the close ups of real ants both on the actual set and with stock footage. You really believe that the ants have a collective consciousness and the two scientists are in trouble. The actors do a fantastic job of communicating the claustrophobic environment they are confined into, the rising sense of doom that causes them to come into conflict with each other and also with themselves. The sets are decent and honestly although they do not look like a million bucks, they look decent at worst. Also a thing that really hit a sweet button to me, is that the science doesn't feel ridiculous.

All in all, Phase IV is an excellently structured, claustrophobic drama, made by a man who knows his stuff. It doesn't sell you cheap fun, it takes itself seriously and earns the respect of the viewer. Definitely recommended.