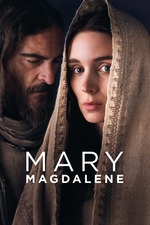 While more and more Christian films are getting made every year, biblical films in particular seem to be a thing of the past. So does Mary Magdalene have anything new to offer? The film’s intent is clear right from its tagline: “Her story will be told.” And yet the refreshing thing about Garth Davis’s Lion follow-up is not so much that it attempts to tell its tale from a silenced female perspective – which is less fleshed out than it should have been to truly make it effective – but the mere fact that the focus is on someone other than Jesus Christ. From Martin Scorcese’s The Last Temptation of Christ to Mel Gibson’s The Passion of the Christ, most films that depict the life of Christ are also about Christ.

However, this humanist biblical drama about love and devotion often feels somewhat narratively vague and uneven, perhaps due to the unknowability of its characters and the familiarity of the story. But while you may find yourself losing interest along the way, Rooney Mara’s magnetic performance as Mary Magdalene and Davis’s meditative, ambitious approach will frequently pull you back into its quietly stirring, undemanding spiritual journey.

READ THE FULL REVIEW ON FILMVIEW