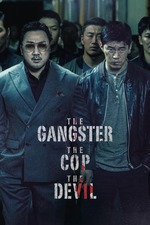 A slick, violent action-thriller that errs too far on the heavy-handed side to be truly great but is still a very fun ride built around Ma Deong-sok’s stellar performance as the titular gangster.

The word I would use to best describe this flick is “heightened”. An opening text suggests the film is based around true events that have been, quote, “dramatized” - I’ve struggled to identify a particular case this is built from, with Indiewire’s review only noting that it’s "(sort of) based on some actual murders that took place around that time”. Perhaps the case is more famous in Korea and could be found in Korean language sources, but essentially, it feels safe to guess that the majority of the events depicted didn’t happen the way they do in the film - and that no one looked as cool in reality as Ma Deong-sok does.

I keep going back to Ma because without him, I don’t think the film would work. Technically, I’m not even sure he’s meant to be the star: he plays opposite the younger Kim Mu-yeol’s cop protagonist, but Ma steals every scene he’s in. His gang lord Jang Dong-su is a titanic bear of a man, believably shrugging off an attempted murder by the serial killer that drives the plot. When he tosses around goons from rival gangs or Kim during one of their many antagonistic meetings, his sheer physical presence makes those scenes deliver.

The actual plot unfolds pretty straightforwardly: after surviving the serial killer’s attempt, Jang reluctantly joins forces with a handful of slightly-rogue police to track him down. “Whoever catches him, keeps him” they agree, meaning that the bulk of the film is an uneasy truce as each faction tries to catch the killer first, and either bring him to justice or put him in the ground. There’s not really a sense of mystery - we’re frequently shown the killer in action - but the film keeps moving with enough energy through the various investigation scenes that the audience isn’t given much time to consider that, nor is there a great deal of effort to give the killer any real motivation or complex identity. This is a thriller, with an emphasis on the thrills, but without too much depth on top. Ultimately, your enjoyment of the film is going to rest on how much fun you’re having watch Ma and Kim careen through the city on the killer’s tail.

What lets the film down most, and it’s a dissatisfying trend I’ve observed in a number of recent relatively high profile South Korean imports like Train to Busan (which also features Ma) and Battleship Island, is how on the nose the rhetoric is. Ma and Kim working together blurs the line between criminals and the police, but the film isn’t happy to let that motif speak for itself - just like Train to Busan’s individualism-vs-collectivism argument, characters frequently foreground the subtext explicitly in dialogue. Ironically, that is to say nothing of the film’s conclusion, which is tonally all over the place in its weighing of law and order vs. the retribution represented by Ma.

Still, I want to circle back to what makes the film good: Ma’s performance; the slick presentation; some bursts of satisfying, brutal action; and some moments of well-delivered humour. Don't let my more negative takes distract from what works. It’s not a subtle film, but I’m very happy with it as my first film of LIFF2019.