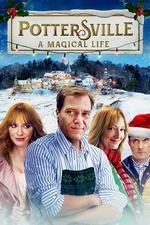 I'm not really into Christmas movies that revolve around a community, or that include a hefty amount of schmaltz regarding the spirit of giving, etc. It all always seemed so cynical and artificial to me. Now comes along a Christmas film that can't be written off as gross capitalism or a cloying attempt to play on a viewer's sentiment. At least, I don't think so, because the bottom line is that Pottersville is so startlingly mismatched in content, style, and execution that I'll never be certain who it is for or what its purpose may be. As a sappy Christmas movie, it seems whacked out and inappropriate. As a mildly naughty comedy, it never rises above the wide-eyed shock of the miscastings and the ill-conceived mixture of worn out plot motifs.

Michael Shannon, typically of creepy or vaguely menacing characters, here plays a George Bailey type named Maynard, owner and operator of an old-timey general store who floats customers on their tabs and is generally an upstanding nice fellow. I know, it doesn’t really work in execution, either. But then you combine it with Ron Perlman’s nice guy podunk sheriff, and then Ian McShane’s wizened, eccentric mountain man. The movie seems to operate as a dare for these three talented character actors to play as far against type as possible, and I suppose it’s worth observing from a pure “you have to see it to believe it” perspective. McShane proves he can make even the most pedestrian material sound fantastic, whereas Perlman seems to be having fun at least. Shannon can't help that he is naturally terrifying, and that a drunkenly slurring Michael Shannon is far more terrifying. But he's trying. He's trying something here, and by the end when his protagonist is lifted up as a hero of the community, and he responds with a real aww-shucks, "Well, whaddyagonna do?" it won me over.

The plot surrounds Maynard’s accidentally putting his dying little town on the map as a premiere Bigfoot venue, after going on a drunken romp in a crappy gorilla costume. His wife (Christina Hendricks) is a secret furry, you see, and in an attempt to appease her fetish he inadvertently drew the attention of the press, tourists, and a TV monster hunter looking to catch a sasquatch. What does this have to do with Christmas? Very little, admittedly, until the third act demands it. The film occupies itself mostly with pointing at laughing at the very existence of furries, taking aim at Thomas Lennon’s phony Australian TV host’s “Crocodile Hunter” routine, and cribbing large swaths of dialogue from whichever movie that screenwriter Daniel Meyer’s cable package had on that night.

It’s not enough that McShane plays a Captain Quint type, he gives the entire Quint speech to the townsfolk word for word, complete with nails on a chalkboard. Later, he actually takes Perlman and Lennon on an honest-to-goodness adventure into the woods, Jaws style, to bond with each other and fight a monster. It's staged and shot this way. In the end when Maynard’s customers all pay their long overdue tabs, Perlman actually toasts him as “the richest man in Pottersville,” straight out of It’s a Wonderful Life. Meanwhile, poor Judy Greer occupies a weepy Hallmark channel drama all of her own. Lennon appears to be playing the villain in a 2006 Ryan Reynolds comedy, and even performs the entire infamous Christian Bale diva-freakout monologue on a crewmember, to emphasize his buffoonery. See the pattern here? Nothing fits. There are four or five different comedies happening here, especially if you count the constant return to furry jokes and eventually a furry party in the woods that looks suspiciously like Eyes Wide Shut, only with big mascot costumes.

Who is this for? The story shifts between a very adult story about perceived debauchery, a very family-friendly story that resembles most sappy Christmas outings, and a somewhat tamed down riff on Without a Paddle with Lennon improvising hogwash sasquatch facts and repeating certain words in his terrible Australian accent for comedic effect. As the story clunks through each, the cinematography stays rooted firmly in the digitally-rendered winter wonderland that characterizes most Lifetime holiday films. While certain sets, like Maynard's store, are wonderfully designed by what must be a journeyman team of television dressers, the film could easily have been a minimalist play for all it does with these backgrounds.

"This magical sense of...well, Bigfoot...really brought this town together," Maynard earnestly says on television when his hoax is revealed. Later, Judy Greer's (sadly, once again underestimated and under-utilized) character tells him, "You thought you had to become Bigfoot to save this town, but...," and I smash my head against the wall repeatedly. As if the bulk of this movie wasn't bizarre and ill-conceived enough, the final fifteen minutes or so is entirely unearned sentiment that has to be built on top of this whackadoo Bigfoot premise. Additionally, Hendricks' character is positioned to be the unreasonable, shrewish evil wife who gets the boot. Why? Because she revealed a secret fetish to her husband? How horrible of her.

Seen from another angle, this could have been quite a clever deconstruction of the warm holiday fable, something akin to Groundhog Day. It approaches that, but I couldn't separate where the deconstruction met with actual sugary holiday fluff. And the comedy in between is just...off-putting in its lazy regurgitation and lack of an intended audience. I couldn't show this movie to my grandma! I'd have to explain furries and cryptozoology to her. I couldn't sit and watch it with my kids. It's way over their heads. I definitely shouldn't have watched it alone, if anything because everyone should avoid being alone when hearing Michael Shannon say, "I'll play freaky forest animals with ya."

I was creeped out on so many levels, not by the furries but by the malleable tone and reality of this world being depicted.