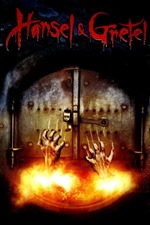 Hansel & Gretel was one of four Hansel and Gretel movies that came out in 2013, a fact which is both annoying and infuriating due to their collective ineptitude. This Hansel & Gretel at least doesn’t pretend to be something it’s not whereas the higher budget Hansel & Gretel: Witch Hunters had too many missed opportunities and unfleshed out plot points (a diabetic Hansel, for example). This Hansel & Gretel is an Asylum horror movie and makes no apologies for its badness. I enjoyed it for what it is: a bad horror movie with some bad acting and over the top stupidity. Good times.

Hansel throws a baby fit and runs off into the woods when his father announces his engagement to his girlfriend. Gretel goes off to try and find him. Gretel is surprised to find a house in the woods occupied by her boss at The Gingerbread House, sweet old lady Lilith. Lilith is one of those insufferable old people who are always trying to get you to eat and are so sugary nice you wallow in the unbelievability of it all. Or is she? Dun dun dun! Gretel soon discovers her brother is being held prisoner in the basement and Lilith reveals her witchy ways when Gretel won’t follow in her meat pie making witch footsteps.

Dee Wallace is a lot of fun in this. Really not as bad as a lot of reviews would have you believe. Hansel & Gretel: Warriors of Witchcraft and Hansel & Gretel Get Baked are worse offenders on this piggyback train.