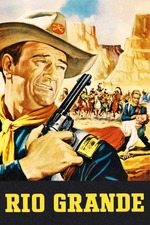 It takes about 10 minutes to see that Rio Grande has John Ford on autopilot: he directed the film in order to make The Quiet Man, a passion project of his. This is just a complete snoozefest, one where the only things worth of note are the many songs that get quite old, Wayne's moustache, a really infuriating portrayal of native Americans that sees them as faceless monsters, and a couple dangerous stunts that actually costed the life to the stuntmen. Not worth watching, easily the weakest of Wayne's and Ford's films that I have seen. Main theme's great though!