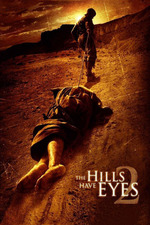 Unsurprisingly, the sequel to the remake of The Hills Have Eyes 2 is really shit. Incredibly gross, gratuitously gory, darkly-lit (whenever we are indoors), chock-full of idiotic and horrible characters, and with a cheap DTV look, it's one of very few films that I would consider a total waste of time. Curiosity got the better of me with this, and while I did REALLY like Aja's remake (might still be my favorite film of his), it warranted even less of a sequel than Craven's original. Kind of a shame that Wes himself and his son co-wrote this film: he had a chance to make things right, and gave us an even shallower and more uninteresting sequel than what he did in 1984. If you like your horror films full of blood and guts, no interesting characters, no story or themes, cheap and ineffective jumpscares, and both hilarious and incredibly uncomfortable moments, then this film is for you. It sure wasn't for me, and I feel guilty for even giving this a shot. At least the gore looked good!