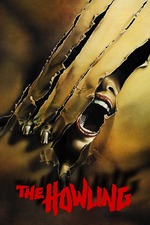 The Howling, a.k.a. "the other famous werewolf movie from 1981", is a film that I had been highly anticipating, yet cannot deny that deeply disappointed me. Often hailed as one of the best werewolf films (a subgenre that isn't already that popular to begin with), the biggest letdown was just how uninteresting on a narrative level this was. While the much-superior An American Werewolf in London (there's a reason why everyone knows that one) spends a good portion of the beginning to set up the characters, this gets straight into the action, and never made me care about any of the characters or what was happening to them. My disinterest in them made 90 minutes feel at least like 2 hours.

Now, this is not a bad film. Its final 30 minutes almost make up for how dull the first part is, especially when you find out that the scope of the horror is bigger than expected. Plus, the quality of the make-up effects on the werewolves is pretty impressive, especially on Picardo's face during one infamous scene. Climax is pretty good though, and Donaggio's score punctuates the horror well.

Still, even with those positives, I found this to be quite the underwhelming watch. Hype was not particularly high, but it does not help that it is a rather boring, at times even slightly goofy, horror cult classic that shockingly spawned a series of 7 SEQUELS (whose scores range from 2.3 to 1.6 here). Quite a few love it, so I am aware of being in the minority with this, but I hoped I would have liked it. Wasted potential!