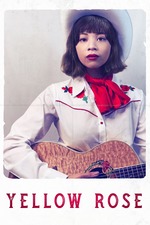 wrote about this for the NYT:

A small-town Texan teen, Rose Garcia (the Broadway performer Eva Noblezada) lives in a humble roadside motel with her mother, harboring big dreams. In the privacy of her bedroom, she croons beautifully, then whispers affirmations to herself — “Thank you, Austin! I’ll be here all week!” — fantasizing about being a country star.

Rose’s first visit to Austin happens when a sweet record-store boy named Elliot (Liam Booth) takes her to a honky-tonk bar where she meets the local legend Dale Watson (who plays himself and contributed original music). “Nothing bad will happen,” Elliot promises the apprehensive, sheltered Rose — but her dreams shatter later that evening when she returns home to an ICE raid and the arrest of her undocumented mother.

The writer-director Diane Paragas spins a story that is both politically timely and personal. (Like Rose, she is a Texas-raised Filipino-American.) “Yellow Rose” is often affecting as its gifted heroine dreams while drifting between parental figures, including her aunt (Lea Salonga). Yet Paragas’s use of the white savior cliché rings false, especially considering our current political climate. It feels far-fetched when an ICE agent lies on Rose’s behalf, putting her dependency for survival in the agent’s hands. Ultimately, it’s frustrating to watch this dangerous shift play out when we know the real-world stakes.

It’s a shame considering all the lovely notes that “Yellow Rose” manages to hit, notably with the lushly lit bar scenes and Noblezada’s emotionally nuanced, honey-voiced performance (her debut screen role). Above all, the music has the greatest staying power — it is the film’s saving grace, just like it is Rose’s during her darkest days.