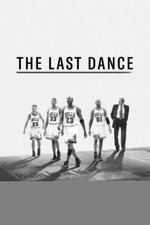 I enjoyed watching this for the last five weeks along with every other basketball fan in the country. This is a familiar story told in a straightforward way, more akin to an NFL Films special than something you'd find at a film festival—which I don't mean as a critique! There's a place for these kinds of films, that focus on bottling the atmosphere of the moment as it was culturally experienced at the time and on detailing it with the perspectives of the key figures. Jordan himself is pretty transparent: a passionate and driven player, who was often a jerk, and who held particular relationships close to his heart amid a tremendous career. The most interesting and compelling parts of this series are about the lives of the supporting cast: Pippen, Jackson, Rodman, Kukoc, Kerr, et al. I wish that this series had found some time in its 10 hours for a bit more of those stories, and more about the actual basketball of it all. Teach us a bit about basketball after you've grabbed our attention with the personalities!

A Murder is Announced