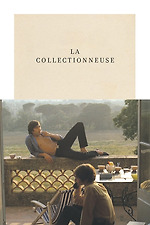 Wow, what a pure throttling of masculinity. Adrien and Daniel – womanizers, hedonists – are relaxing on vacation when enigmatic Haydée arrives, known as a collector of men. When she doesn’t give either man the time of day at first, and spends ample time being picked up by other boys, their poor egos are bruised. Despite their chauvinistic attitudes and the fact that the sole purpose of their trip is pretty much to pick up women, the men lambast Haydée as a slut but secretly vie to be part of her collection. She constantly walks around in bikinis almost as a taunt, which of course riles them up even more. Adrien is such an ass that it’s funny. Early in the film he claims he can tell when a woman is interested in him and states that he’s such a gentleman that he wouldn’t dream of taking advantage of Haydée. Once it becomes clear she’s not actually into him, he becomes infatuated and more and more desperate to be with her, completely flip-flopping anything he says just to please her. But Haydée, despite seemingly being a fair few years younger than her male roommates is far more mature. She’s her own woman, not caring what she’s labelled as and comfortable in her own skin. Confident in herself and having no need to stroke her own ego as the men do. The ultimate scene in the film is, after a brief fling with Daniel, they break it off and Daniel attempts to run her down, saying awful things and trying to justify himself. Haydée just lays on the couch, uninterested. She lights a cigarette and stares at the ceiling as Daniel begins to stumble over his words and make an idiot out of himself. Her silence if deafening, her uninterested demeanor the ultimate “fuck you.” Haydée practically toys with the men. Is she actually a collector? Is she just bouncing from guy to guy looking for ‘the one’? Is she just fucking with them for fun? All three explanations and more could be correct but it’s without doubt pure fun to watch. The sexual tension is palpable and Rohmer weaves his magic wand behind the camera to create such an intoxicating environment. Possibly my favourite of the moral tales.