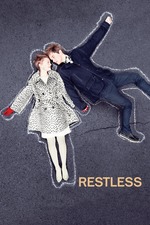 Restless has some flaws that totally make me understand why some people heavily dislike it – namely the fact that lead character Enoch is a little obnoxious and pretty disrespectful to the dead. He has an obsession with death, visits funerals of people he doesn’t know and calls dying children “cancer kids.” However, that’s the point – he’s supposed to be a little hard to get along with, at least at first. With his parents having died in a tragic car accident, and he himself having momentarily died before sitting in a coma for three months it’s easy to understand why his view of the world is a little different to everyone else’s. With no school, no car, and no one to connect with, visiting funerals is the only small way he can link his loneliness to the act that cost him his mum and dad. So when he meets Annabel at one of these funerals, a girl who’s got her own unique idiosyncrasies and charming free spirit, they come together instantly and form a tight bond. Unfortunately, she’s one of those “cancer kids” and will be dead within three months.

Luckily Annabel is far from your typical manic pixie dream girl, and is played so well by Mia Wasikowska that it’s hard not to fall in love with her yourself. Her upbeat demeanour in the face of certain death is infectious, and her open-minded attitude towards Enoch talking to the ghost of a 40s kamikaze pilot and her obsession with Darwin and water birds makes her extremely easy to like and helps give the film a true emotional punch, knowing the inevitable ending. Her presence also makes Enoch a more likable character, and as their relationship blossoms the film really hit its stride. For the first hour it’s really very good, unfortunately it loses steam in the final thirty minutes. An argument between the two is crammed in out of nothing, as if the filmmakers insisted on sticking with conventional plot points and refused to differ from that structure. The argument leads to Enoch becoming more of an ass than he was even at the start of the film (yelling at the doctors to simply ”make her better!”, blaming his innocent aunt for killing his parents, destroying his parents grave) and suddenly we’re in cliché territory. Now the film, even when it was good, was never anything spectacular or unique but the authentic central romance brought out it’s hearty emotional core. Strip that away everything begins to fall to pieces. The ending is predictable but still ok, but the film couldn’t recover after getting off track.

Like almost all other Van Sant films, the soundtrack is mostly excellent and adds even more emotional texture to certain scenes, though one or two sappy piano scores derail a few moments. The cinematography is also good and helps raise the film. Van Sant captures the snowy suburbs expertly and practically every short that has both Enoch and Annabel in it together is beautiful (the chalk outline shots especially.) Nowhere near Van Sant’s best film, but I connected with it personally and it's a solid addition to his oeuvre.