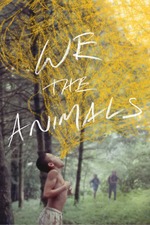 Maybe it isn’t entirely fair to this film specifically, but in recent years I’ve sharply turned against these indie attempts at deliberate lyricism and faux-Malickian expressionism. When they work, they really work. But now it feels like these kinds of films are a dime-a-dozen, with filmmakers aiming for this “prestigious” aesthetic that festivals lap up, and too often it feels at the expense of the characters and every other aspect of the film. It feels like for many of these directors, the aesthetic comes first, and everything else second, when the aesthetic of any film should exist to compliment and springboard from the initial ideas. We The Animals is a pretty film that often feels at odds with itself. Again, maybe this is unfair, but you can practically feel the festival banners being pasted onto the next batch of posters for the film. What’s worse is that I think the central core of the film has something interesting + important to discuss, but the film too often seeks to draw our eyes to images that feel superfluous and deliberately arty, and we lose the central crux of the grittier, familial narrative. It also didn’t help that I found the central kids a little annoying, which I understand is my problem rather than the film’s. So this didn’t work for me at all. However, knowing my taste, prepare for a review next week where I watch another film like this, love it, and state the exact opposite of what I said here.