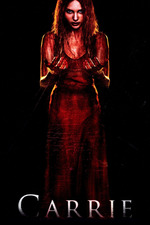 My first film watch of 2022 and it's decent enough though it works less as a supernatural horror movie and more like a cautionary tale calling for more empathy in the world.
I won't say I had high hopes for this remake but I figured that casting Chloe Grace Moretz and Julianne Moore it couldn't be all that bad and that's certainly true. Though neither of them delivers as much impact as Sissy Spacek and Piper Laurie in the original, I thought they were still very good. Now that's a highly unfair bar to set, especially given the drastic difference in style and tone of this remake, but this is one of those situations where comparisons are almost unavoidable.
And truthfully, I felt there was plenty of good work throughout the cast that neither Moretz or Moore are required to do all the carr-ie-ing.... haha! ...sorry...

In my opinion, remaking Carrie seems pretty much an automatic green light just given the amazing technological developments for bullies and abusers to torture and traumatize (and kill) their victims since the original's release in 1976. The last time I rewatched DePalma's original, I felt too unconvinced of Sue's and Tommy's motivations (letterboxd.com/film/carrie-1976/)
In addition to updating the story details for a modern audience, director Kimberly Peirce's version succeeds best when she showcases the emotions and interactions of her characters, amidst the supernatural events.
For the gym shower scene, Peirce neither copies nor reinvents the wheel but uses camera phones and social media to set up an even grander Guignol finale than the one with which we're already familiar.
The scope and magnitude of Carrie's initial humiliation in the showers goes way beyond the school's walls, making her torment a re-playable entertainment for the world. It's as if the scope of it all suddenly dawns on Sue even while she is actively taking part. And this is where I really started to appreciate the idea for this remake and particularly dug Peirce's approach investing in Sue's development away from being a bully with genuine remorse and empathy towards a well-intended though ultimately ill-fated reparation, and for me Gabrielle Wilde sells it
Her suggestion that Tommy takes Carrie to prom becomes less about MAKING him go with her to feel better or giving him to her as some kind of gift. It reads more like an act of contrition through self deprivation - she believes she no longer deserves to go and to make up for humiliating Carrie, Tommy should take her instead.
Ansel Elgort's Tommy is given much more screen time here to show he's more than just the BMOC (do the kids still say this?). The pre-bucket prom moments between Carrie and Tommy are allowed to build genuinely and sweetly without saccharine so that the moment we all know is coming feels more tragic.

Where this movie mostly falters for me is with the staging and execution of Carrie's powers throughout the film and though I don't want to keep comparing against the original, DePalma's version remains far more striking and effective in this department. Thanks to a prologue sequence that at first felt perhaps unnecessary but ultimately complicates matters  we see that since birth Carrie had these abilities as a kind of self defence system. Later, she very quickly (too quickly for me and my missus) seems aware of them and able to somewhat control them.
In the end, it looks and feels less like she's unleashing her barely controllable telepathic rage against the entire school rather than she has turned to the dark side and is fulfilling her witchy destiny complete with Avengers-level hand conjuring. I prefer the original's depiction of Carrie's climactic powers as whip-fast snake strikes, almost entirely reflex and instinct rather than a physical extension of a thought process.
A few sympathetic characters are seemingly 'allowed' to survive the prom which (post Columbine, Parkland etc) is perhaps understandable on a studio notes level, it does give Carrie a pre-meditated vibe.
She seeks out Chris and Billy, hunting them down in an OTT showdown that seems like someone said we need more CGI effects here.
I'm kinda of two minds about the tone of all this. On one hand I agree with my missus that it turns Carrie into more of an unredeemable superhuman monster.
On the other hand, I feel like the film's biggest strength was showing empathy, its importance and potential and in some way this shows the consequences of its absence - doesn't Carrie deserve to mete out her justice as she sees fit?

DePalma's original still manages to jolt, scare and haunt with its superior editing, iconic design and performances.  Peirce's remake is engaging and entertaining enough. It's a surprisingly insightful remake, well performed, but there's nothing scary or iconic in it.
Which is my way of saying that no, there's no hand from the grave at the end.