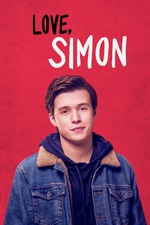 Why yes I am crying. And so are you.

After finishing up a long morning of appointments and having the rest of the day off of school I asked my 13 year old boy:
"Do you still wanna see Love, Simon?"
"Yeah, why not?"
"Well we could go right now and see it at 12:45 or there's another at 2..."
"It's probably better to go now and do the first one."
"Ok then, perfect."
"... but I think I would rather see it on my own."
"Oh. Alright. Well, I would like to see it too... but if it's alright for you to see it on your own, I guess I could see it another time - maybe I'll just see something else at the same time?"
"Sorry Dad."
"No that's ok. But if it is something you can't go into on your own and you want to see it alone, I could go sit on the other side of the theatre or something. Would that be alright?"
"I think they'll be fine."
"Maybe, but just in case, would that be alright with you? Coz I'm fine with that if you are. "
"Yeah I guess so."
We grabbed a quick food court sushi lunch and hurried over to the cinema and see that "Love, Simon" doesn't require adult accompaniment.
"Yes! So I can see it on my own."
"Yep, one for Love, Simon"
- will that be all for today?
"........uummmmmmm....."
(there is nothing else on of major interest and I don't feel like seeing Black Panther again just yet)
"Hey kiddo, there's really nothing else for me to see. I don't wanna crowd ya, but do you mind if I see it too?"
"Yeah, that's fine."
"I can still sit somewhere else."
"Ok. Sorry Dad."
"Hey don't worry that's not a problem, pal. Thanks though."
"That's alright."

The movie was terrific - hilarious but also very moving.
It felt reminiscent of the best of John Hughes in that it was a fresh, witty, sympathetic movie about real teen life but was very much its own film.
The emotional tone was sincere without being too earnest or idealistic nor relying on melodrama or tragedy to cheaply earn our sympathies.
The comedy ranged from real-life situational to more off-the-wall, stylized non-narrative moments - fantasy montage of friends coming out as straight to their parents or Simon imagining his future liberated self at an out of state college.
But neither tone felt out of place - it all worked.
I laughed and cried and laughed and clapped.

When the lights came up and my eyes were dry and my son and I reunited he told me he enjoyed it as much (or more) than I did:
“It’s the absolutely the best movie I’ve seen!”
“You said that after Isle Of Dogs, do you just say that after you finish watching something?”
And at that moment I felt like Simon’s dad, just trying to be funny but maybe I shouldn’t have...