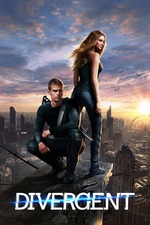 I remember seeing the poster for this in high school and thinking “I am staying as far away from this as possible!” Attractive people in a generic stance with a generic title in front of a generic sci-fi background? AND it’s an adaptation of a YA novel? When I realized Ansel was in it I immediately went “Oh come on!”

So this is simultaneously better than I expected and as watered down as expected. I’m trying to be a bit more open minded with how I talk about movies I don’t like because after The Fault In Our Stars, I realized some movies just weren’t made for me. That said, I don’t know who the hell this is for so who cares what I think.

Aside from the many...many punchable faces in this thing—refer to guy with Macklemore haircut and piercings—the most frustrating thing about this is the shallow world building. It’s clear most of the budget went into building a hot cast and bumpin’ soundtrack. The opening credits fly over a destroyed, futuristic look at Chicago. The rivers are fields of grass, Navy Pier is in shambles. Seems pretty interesting right? Well then they spend the next two hours and twenty minutes in warehouses.  Too much to write in regards to Ansel. Just can’t believe I have to watch two more of these movies.