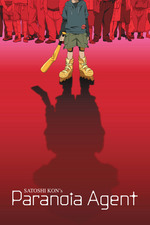 Feeling pretty blown away by this. Satoshi Kon’s work is some of the most terrifying to me because of how he effortlessly creates a space in your head. ‘Internal’ is probably the best word to describe it and while that may seem intriguing, any of his films would suggest the opposite. With ‘Perfect Blue’ and ‘Paprika’ he accomplishes so much with so little, taking high-concept ideas and boiling them down to their most electrifying parts. That said, you can imagine what a +300 minute Kon mini-series could do.

While this series does what it can to explain itself, Kon’s own views of reality are far from one-dimensional. There is a sense of hate towards the surreal for acting as a distraction from reality, a refusal to accept. But there’s also a love for fantasy, for the what-could-have-been. What I’m getting at is Paranoia Agent is such a love letter to the moment, humanity, and self-forgiveness. There is a scene in episode 8 that is too disturbing but too sweet to ever leave my head. I’m equally as disturbed by this as I am in love. Having impulsively binged the entirety in one day, I’m kind of afraid of the nightmares I’m about to have.