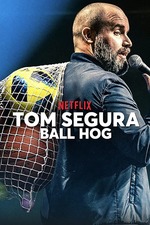 Got really into Tom’s standup this last year, specifically ‘Thrilled’ and ‘Completely Normal’. This definitely feels like a different side of him in a mostly terrible way.

On one hand he gets a lot more vulnerable and insightful than he usually does, especially in the second half, which is weirdly refreshing. On another, specifically in the first 30 minutes, he gives into to the lazy ‘Triggered’ type of comedy that feels wildly unoriginal and unfunny. It’s not like Tom never leaned toward deliberately offensive material before this, but at least his earlier work came with some kind of punchline? I huge pet peeve of mine is when comedians critique the audience for being offended at a comedy show. I can get behind this argument in some cases, but don’t preach this and proceed to tell a joke where the punchline is “I like upsetting people.” Personal taste is one thing, saying something “triggering” because it gets the blood flowing is lazy and not...uh, funny! Glad he was able to swing back with some solid material in the second half but man is this a downgrade.