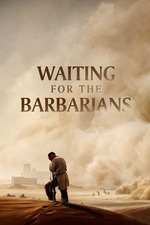 With a wide release in VOD in America, this is my first Western of 2020.

A colonel of the police comes to inspect a frontier town as the fear of “Barbarians” spreads. It’s about the irrational fear of the frontier life and the unfair rules and regulations put on the paranoid people. The main character, the Magistrate, seeks to keep the peace as he digs up old artifacts of the world that was destroyed to make way for his. I haven’t seen Mark Rylance in much, but he’s good in this role. Colonel Joll, played with precision by Johnny Depp, is an aptly-written outsider with secrets.

There’s some camerawork I didn’t love, including focusing on a character in the foreground and instead of simply having the background characters out of focus they looked like low-res computer characters. This was literally only one scene but it distracted me enough to mention it this much.

Many will find this boring or lacking in thematic depth, but I would disagree. The atmosphere and look into frontier life along with colonialism are interesting enough to keep it all going. Some might compare this to the film Hostiles with Christian Bale and Rosamund Pike. I think that movie had slightly better direction but worse pacing, writing, and themes than this. This is more consistent in its look at the subject matter than that film in my opinion.

It took me a really long time to realize that this film is not set in America in the old west, but is actually set in an unnamed empire and the artifacts the Magistrate finds are of our old world. This isn’t a spoiler that it’s some dystopian film; it’s supposed to be obvious in the beginning but I had no idea. Some complaints others may have are that the film falls slightly into the white savior trope, our main character being a white authority figure that must advocate for the natives who have less agency. I don’t think it’s much of a problem because it’s well-handled and made by a person of color. I’d say an issue is that it genuinely feels like it has no real reason to be set in some dystopian future other than maybe showing how the cycle of oppression seems to always continue.

Oh, and Robert Pattinson is in this! It takes over an hour but good for him!

I enjoyed this and don’t regret buying in on VOD. This is definitely the DAD movie of the year, like Ford v. Ferrari was last year but not as good. Still solid in my opinion and well worth a watch. The best compliment I can give the film is that it feels influenced by the work of Ray Bradbury.