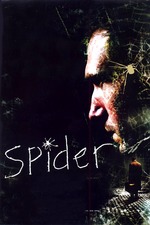 Cronenberg's delve into guilt and trauma in Spider is a worthy and engaging effort. The despondent and incredibly bleak tone seeps into every shot and interaction through the eyes of our unreliable protagonist, “Spider” Cleg (Ralph Fiennes.) His recollection of the event from his childhood, which led to his hospitalization, haunts him from that moment to an almost comatose state of inner anguish into his adulthood – trapped in his head, replaying key moments, wishing to rewrite the chain-of-events in a desperate state of compartmentalization.

Memories of his upbringing and hospitalization overlap into the present, his current residence in a halfway house, to an overwhelming degree; to the point of where fact-and-fiction and the identities of the people around him become interchangeable – Cleg isn’t sure of it himself, and neither are ourselves; we’re trapped in his web-infested head with him, after all. Faulty memories and the connection this has to our own instabilities and grudges is the focus of Spider.

The portrayal of this is reserved and grounded, for me, mostly to its detriment with this feeling at odds with the unreliable point-of-view and fractured storytelling. In the hands of another director, this source material, the analysis of mental illness, more than likely would have been played for shock value or be exploitative. Cronenberg should be commended for this distant approach, even if in the long run, Cleg himself feels like a case-study rather than a fleshed-out character.

There’s a decent amount of sympathy to take away from depicting it in this realistic way however; as a viewer we’re only in Cleg’s head for a little over 90 minutes – whereas he’s had a lifetime of confusion to experience over and over again. Fiennes' performance also does a great job of showcasing this.

It's matter-of-fact, for me, almost to the point where I fail to see a message or purpose behind it other than a heavily realistic portrayal of a tragic event, with some excellent acting from its cast. Some will really, really like this and maybe after when it has sat with me I might too. I just couldn’t get past the point of appreciating its execution and really connect with it on an emotional level; much of it was just too skin-deep, for my tastes.