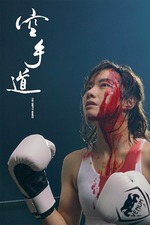 A technically impressive if undercooked project from Chapman To, The Empty Hands is an enjoyable ride with its share of weighty moments from the strong lead performance, courtesy of Stephy Tang, in an otherwise standard tale of legacy and self-realisation - just don't expect many surprises from its narrative and barebones supporting characters or you'll come out the other side a bit underwhelmed.

The unique style, sharp editing and effective shots contrasting music and silence helped to soften the blow of its lack of depth in certain areas: mainly a more thorough analysis between the dichotomy of martial arts to the modern world would have been welcome, as well as more thoughtful character/family dynamics - these things are touched upon briefly, however, I can see the frustration people can have for wanting a more complete drama with how broad it seems to set its sights at the beginning, as well with the lengthy introductions of Chan Keung and "Mute Dog" that are seemingly pushed to the wayside for the most part.

The focus of The Empty Hands is hinged almost entirely on Tang's portrayal of Mari Hirakawa and this will make-or-break whether you will be invested with it or not, for me, this was the highlight - Tang's performance brings depth and tragedy to a seemingly passive and somewhat vindictive person from when we're introduced to her, with the breakdown she suffers in the second act and extended montage (and fight scenes) that follows to be an effective tipping point in rooting for her character.

In many ways, I felt conflicted about how lightly some of the drama was played in this and on a bad day I would probably focus more on it, but I found it to be a well-executed action-drama with enough variety, visual flair and boosted by a great lead performance for it be worth rewatching on a more surface level.

I Am the Pretty Thing That Lives in…

We Are Still Here