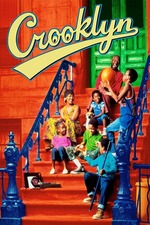 A good double feature with Meet Me In St. Louis, a coming of age musical set in something that resembles paradise, with hints of the hard times that will come. Not that Lee isn't here shying away from the hard times that already plague his family: a black neighbor is arrested on the basis of a white man's call, paying off the electric bill is never guaranteed, and food stamps are a part of life. Lee's story, written with his younger sisters, however, interludes this with the problems of kids learning their place in society, trying to rise up to the level of their parents (and in the case of Troy, supplant her mother). The wall-to-wall music imbues Lee's camera with a swerving attitude that rhythmically picks up details of influences of the time: the image of a powerful Black Mama in the grocery store, the drug sniffers as Shakespearean comic relief, and the various black heroes as seen on television.

The swooping cameras that have become Lee's trademark differ from Scorsese in that he swerves back as something comes back into focus, as opposed to Scorsese barreling. It's like the mind of a child that can't stay focused on one image for too long. Kent Jones smartly note, "The action is interestingly dispersed across a more delicate visual palette than the burnished tones of Ernest Dickerson would have allowed (courtesy of Daughters of the Dust cinematographer Arthur Jafa), suggestive of public-school mural art," and often the film's biggest moments (the screaming close-ups of Troy, Snuffy and Right Hand floating upside down, and even the slow walk up the stairs to the funeral) are the kind of grand gestures that make Lee the filmmaker he is.

Thinking about his work, the sort of crassness of some of his decisions - most notably the aspect ratio squeeze in the South and some of the odd cruelty that takes place, as well as his need to really soak the message in with Alfrie Woodard talking directly to the camera - is almost necessary for him as a filmmaker. He can't get to his really poetic moments like Troy with her mother at the hospital or DelRoy Lindo collapsing on the stairs without some of more hasty decisions. Lee's Brooklyn is not a memory of time where things were just a little less harsh, but about those kids learning how to see the world's harsher realities, and more than that, learning to accept and control what they can.