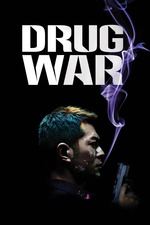 So carefully plays the line between pure genre fun and serious social critique, yet To’s shots expose the world instead of glorify it. Excising genre pleasures for the locals of wintry Jinhai, Drug War opens on a shot of a polluted cloud rising in the distance and only feels more dirty as it gets down into serious business (and only business; I only counted a single moment that could be described as non-action—the parallel passing of money). Instead, it feels like a continuous machine that never stops until the final bullet unleashed. More than its cinematic tenacity – wondrously executed crane shots, shoot outs that use the droning sound of bullets instead of music, clear and precise editing of narrative space – I’m extremely impressed that all exposition is revealed as it happens instead of setting us up beforehand— most notably the dual impersonation meetings, easily the highlight of the film (climaxing with the WTFHOLYSHIT ice bath scene). It’s almost an even more ambitious version of D'Angelo's description of Upsteam Color’s exposition (“presenting you with B and trusting that you’ll work out A”), because there’s no pausing to explain what’s going on, as it’s all a world of insiders. To makes it all forward momentum until there’s no momentum to give (In Media Res: The Movie). Curious to read takes on the final scene, which does feel like some sort of China-based code moralism, but I’m open to other interpretations.

Fake It So Real