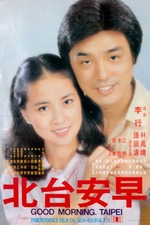 Voices of a city
Heard on radios and bars
Leading the new path.
Even orphans need a family.

This super rare 35mm screening was introduced by Duke Professor and author of Taiwanese Cinema Hong Guo-Juin, who provided a lot of great notes I’ll repeat here. Taiwanese cinema before 1982 (aka its pre-history period in relation to world cinema) basically existed in a cultural mode of “healthy realism,” which is a form of melodrama that could also promote state values and institutions. Thus, you got a lot of the same sort of stuff that you got in terms of Soviet filmmaking in the 1940s (“Boy Meets Tractor”) mixed in with not particularly ambitious filmmaking. Director Lee Hsing began in theater and then became a filmmaker with the help of state funding, and made over 50 films by the time he got to Good Morning, Taipei, which is less a transition piece than what Hong described as “the final film of Taiwanese cinema’s pre-history.” As the 1970s and early 1980s changed the landscape of Taiwan internationally, thus the cinema artists began to search for other means of expression, leading to its independent movement.

The presence of Hou Hsaio-Hsien on the screenplay might make many curious, but besides some similarities in theme about the importance of family (the main texture of A Summer at Grandpa’s, the only Hou I’ve seen), no one would mistake this for one of his films. It’s a fairly rote melodrama: boy dreams of being a singer while his father wants him to go to college, plus he’s in love with his best friend’s girlfriend, who runs the all important state radio. Thematically, it’s about the importance of family, community, and insurance (your tax dollars at work). Perhaps the more interesting texture is the protagonist’s best friend is an orphan who continually struggles with his status, trying to earn enough money to support the institution he grew up in.

I won’t make any grand claims, and those even searching for what would emerge only four years later and change the way Asian cinema is viewed* might find themselves a bit strained by not compromised filmmaking, but certainly something that won’t inspire claims of "art." But I enjoy this kind of melodrama. I enjoy these silly Mandarin on-the-nose-about-the-plot-at-the-time songs that the main character sings, I enjoy looking at the food they are eating, and I really enjoy watching everyone get drunk and the men’s awkward interactions with women. I’m sure some post-70s academic would call me out for wanting to observe other cultures and Other them, but there is something about viewing another culture on film that is inherently compelling beyond any aesthetic or artistic mode, especially one that sees itself as somewhat of a city symphony (with a very nice interlude to the coast). Plus, those types of academics are the worst.

*Which was actually more by accident when, as the myth goes, Olivier Assayas was researching Chinese/Hong Kong cinema for Cashiers in Hong Kong, and some cinephile friends told him that the real revolution was happening over in Taiwan.