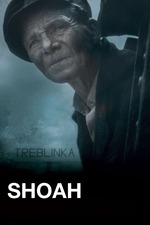 *Based on various excerpts that amounted to around two hours, but if the rest of this film is as strong, this could be an all time for me*

Shoah may be Exhibit A for a consideration of “pure cinema,” a needlessly debated and fraught term that often creates exclusionary practices, but appears quite apt here. Godard exclaimed that cinema’s greatest tragedy to the 20th century was the fact moving image cameras were never brought into the camps, but Lanzmann’s film decidedly avoids any images from the past. So what does Lanzmann achieve in only working in the present?

The past is a malleable object; Shoah is in many ways about the warping of history as much as it is about the specific event that the testimony of its subjects are made to recall. As Shoshana Felman argues, “The film shows how history is used for the purpose of a historical (ongoing) process of forgetting which, ironically enough, includes the gestures of historiography. Historiography is as much the product of the passion of forgetting as it is the production of the passion of remembering.” And thus, Lanzmann has made his film a very present moment, capturing only the index that is present to his cameras, which is itself the idea of testimony, speaking and recalling memories (which of course are susceptible to change).

Pure cinema has been used to describe films with highly complex editing processes or films that capture deep focus reality, but Shoah focuses on something different: the human face and voice. Lanzmann pushes his subjects, often appearing in the frame himself, to recall details from the ghettos and the camps. Instead of focus on showing those details, he wants to capture that reaction in the human face, which has its own very physical quality. He constantly asks about smell, something cinema could never necessarily capture, but he does capture the way people speak about it and their reactions of how they recall it.

Shoah has a goal in re-articulating the history of the Holocaust, which is to a stronger understanding of how each and everyone of us is a participant in its events, erasing the idea of complacency. So in many ways, the film must not be about the whats of what happen, something Lanzmann has decided can never be specifically known, and instead how and why they will be remembered. So thus it is necessarily about the recording of testimony. No clearer is this than in the testimony of Abraham Bomba, who was forced to cut the hair of female prisoners in the gas chambers. Recorded in his public barbershop in Israel while he cuts hair, Bomba recalls in a loud English voice the events that happened, all while never once looking up from his customer. When he reaches a point that becomes to difficult for him to speak, he finally breaks and has to stop cutting the hair, and his voice suddenly drops five octaves as he pleads with Lanzmann to stop. This change in voice, the sudden awareness he has of the space he is recording in (along with Lanzmann’s decision to zoom in, truly showing us the panic), is what we might simply call “thrilling cinema.” When he speaks again, starting his testimony once up, the voice is shakier, more fragile, and his actions more lucid. It’s one of the aspects of Shoah that could only be found through the camera.

Shoah’s canonization is partly about its subject matter—it takes a monumental project and asks a monumental question about the being of human nature—but it is also about form. Documentary cinema now is often critiqued for its “talking heads,” but often because so many of its films are simply giving information. Shoah tells us much about the Holocaust, but its most crucial aspects are how it shows testimony occur, bringing us to the very forefront of the documentary tradition—the radical present. As Kent Jones writes, “It is composed of actions and sensations that play out…projected in turn onto the screen of a sensitively rendered present, both of which are unmoored from chronological time.” Shoah admittedly aestheticizes the Holocaust as much as Kapo did in many ways. But its depiction of it is in a form that radically never registers as cinema, until it clearly and thrillingly, the true sight of cinema.