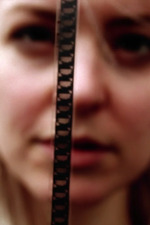 A Key of Ice in a Field of…

Recently I went a-Googling for this film because I wanted to look up the name of the film's fictional director and I discovered that Letterboxd only had one review of it on file and it was one stinking star. Now, my film critic days may be behind me but I was not about to let that stand. I dug out the original review I wrote in 2012 and present it to you here. The review didn't have a star rating, but judging by my deathless prose it seems like the sort of thing I would have given 4-out-of-5.

"This is Jason Coffman's third film to run at a Movieside event--TAPE ran at Terror 11 and THE SECRET CINEMA ran at Massacre 2012--and over the past six or so months, I've come to see the Rabbit Room Productions name as a sign of quality, much as I have with the Lowcarbcomedy name. Coffman's latest--which purports to be the trailer from a lost giallo by a forgotten filmmaker--is no disappointment. A KEY OF ICE... turns out to be a supreme exercise in style, dark and sensual, with a soundtrack featuring Goblin and Stelvio Cipriani. If you miss films about sadistic killers wearing black leather driving gloves, here's yer movie. It's enough to make you wish it really was a feature film..."