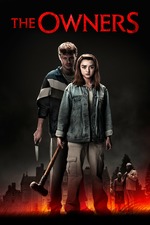 Bunch of assholes break into a house which turns out to be inhabited by total psychos — basically, DON'T BREATHE without the bits about not breathing. GAME OF THRONES star Maisie Williams headlines as a young woman who gets unwittingly pulled into her husband's plan to rob an elderly physician (Sylvester McCoy, best known as the seventh Doctor Who, experiencing something of a late-career resurgence since appearing in the HOBBIT series) and his addled wife (Rita Tushingham). Do McCoy and Tushingham turn the tables on their attackers, and are they hiding a Terrible Secret? What do you think?

What distinguishes THE OWNERS is its cast. Williams proves to be the perfect lead with her patented ability to juggle scrappy and vulnerable, while McCoy and Tulsingham pace their transformation from harmless to fucking terrifying well, and Nick Curran steals most of the first act as the psychotic leader of the heist. Other than that, it's mostly standard stuff, until the final act when things go completely barmy.

Not entirely satisfying, but worth a look especially for fans of Williams and/or McCoy.