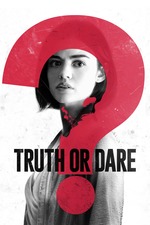 You know the sad thing is that I had low expectations going into this and this cynical trash couldn't even meet those. When I say that this movie is cynical, I don't mean that it's bleak or pessimistic, or that it has an unhappy ending (although one could make an argument that that was what the film was going for, I personally don't thing anyone involved in this was anywhere near that smart). I mean it in the same way that this video means it. Every last facet of Blumhouse's Truth or Dare is a carefully calculated exercise of cliches, formulas, rip-offs, pandering, and out-of-touch judgements about millennials/Generation-Z.

The premise of Blumhouse's Truth or Dare is a group of college students go on spring break in Mexico and get tricked into playing a cursed game of truth or dare in a cursed cathedral and must continue playing as 'The Anti-Christian Evil Demon' of this horror movie hunts them down and kills them if they refuse to play. After watching the trailer, I could already guess that this would probably be a beat-for-beat rehash of Final Destination, and I was exactly right. Naively, I figured that would be the worst of it; it'd just be a generic, forgettable means of collecting insurance with poorly done jump scares (only one of which actually made me jump), condescending messages about the dangers of social media and college life, bland music cues such as that stupid violin noise, the tried and true formula of taking a children's game and 'horroring it up', and an edgy rock song over the end credits. Oh and did I mention that it's rated PG-13? It didn't take me that long to realize that Blumhouse's Truth or Dare was going to be a stiff. After the first scene, a prologue of a minor character being dared by The Anti-Christian Evil Demon to murder a woman by setting her on fire and then smashing to the unlikable main characters being unlikable, I realized I wasn't gonna like the film.

Speaking of which, the characters in Blumhouse's Truth or Dare are as follows: one's a girl who ruins her so-called best friend's spring break plans so that she's forced to go with the rest of them (and also constantly cheats on her boyfriend); the best friend and "main character" who I suppose is the main character, and who ends up literally damning everyone on planet Earth; and the boyfriend who's dating the first girl but has feelings for the second girl even though he's definitely in love with the first one (this love triangle plays a HUGE role in the story). I wanna focus on these three for a second. Let me make this clear; these people are not friends, they're not even acquaintances. They're self-centered sociopaths.

One's a token gay who's closeted to his family but was written to make the audience pat themselves on their backs for watching a movie with a gay character (he's actually not that bad a character compared to the rest). Another one's a girl who's biggest character flaw is that she's an alcoholic (again, she seems nice!). These two are easily the nicest characters in the entire film. Both of them also end up dead, not at the hand of the Anti-Christian Evil Demon, but by somebody with a gun.

There's one who's supposed to be a creepy and pathetic loser that nobody likes because he's a creepy and pathetic loser. I personally thought he was just really awkward and a bit confused but forces himself to be ballsy because he and everyone else thinks it's "manly", but everyone treats him like garbage for every second of screentime he had. He gets killed off first in the pool table scene from the trailer after his masculinity is insulted, his death gets spread via Snapchat, and people still demean him. And the last one's a med student who sells prescription meds to students; he's a huge jerk but that sort of goes without saying. I'm not supposed to like him so I'm not going to talk about him that much.

And, of course, let's not forget the Anti-Christian Evil Demon of this horror movie. Have you ever noticed that the 'bad guy' in a lot of scary movies with the paranormal is often some sort of servant of Lucifer doing his bidding in the mortal world? The issue with these guys is that they're always evil in only the most generic, sanitized sense. He's doing this because he's supposed to; because God is good and he's opposed to God, therefore he's evil. Is it too much to ask for just a little bit more than that? Can we not have a decent villain? I suppose that in a movie without decent heroes that it is too much to ask for.

I don't mind it when a movie is about characters that I hate, or even slightly dislike. One of my favorite movies is A Clockwork Orange, which is about a guy who commits theft, battery, murder, and rape for fun. The thing is that in A Clockwork Orange, I'm not supposed to like Alex. I'm instead drawn in by the situation he's put in, I notice the hypocrisy of a society that punishes an individual for committing violence yet routinely does the same to its own citizens, and I ask questions about whether it's ever moral for anybody to ever take away a person's free will. Blumhouse's Truth or Dare doesn't do that, it wants you to like the characters.

Let me describe how the film ends just to show you how far the selfishness goes. The two best friends are the only two left. And in an extreme act of pure selfishness and sniveling cowardice, she decides to upload a video to YouTube and make it go viral so that every single person in the world with an internet connection is now trapped in the game until they die. Ignoring the fact that that's not how the internet works, imagine if you were watching another version of John Carpenter's The Thing, but it's not nearly as scary, and you get to the famous ending scene with the two characters who realize that there's no escape for them and that they're both going to die. Now imagine that instead of the two of them taking the existential route of acknowledging that they're doomed, they decided to spread the Thing all over the globe so that they personally don't have to deal with it anymore. Congratulations, you have reached maximum nimby.

What really seals the deal is this: these are the people I'm supposed to be rooting for! I'm supposed to identify with them. Well, nothing could be further from the truth. I mentioned how the med school student was helping students get prescription drugs and that the audience wasn't supposed to like him, but I feel that way about everybody. I felt absolutely no sympathy for most of the characters no matter how hard the movie tried. And it really tried, utilizing everything from alcohol addiction to attempted rape and suicide to get me to feel bad for them. And none of it worked, because at the end of the day, the people you see on the screen are almost all vile, and disgusting.

The concept is stupid, the characters are terrible, the execution is lazy; yet there is something about this movie that deeply frightens me. People might overlook these things because Blumhouse's Truth or Dare is just a horror movie. Perhaps, when people get around to writing articles about this movie, they'll declare it a "masterful and artistic homage to the teen slasher films that practically defined 1980s era horror," even though practically every boring horror movie made since the 1990s could also fit that description. People might overlook the things I complain about because Blumhouse's Truth or Dare is just a horror movie; sending up 80s teen slashers, which were all ripped off from two slashers from the 70s, which were both homages to two movies from 1960.

But maybe I'm just overreacting, maybe I'm reading into this a little too much, maybe Blumhouse's Truth or Dare actually isn't that bad, maybe there aren't implicit ideological messages about what it means to be accepted by your peers or how to properly spend leisure time. Maybe I'm employed by Blumhouse and am writing this in order to entice the Letterboxd community into seeing Blumhouse's Truth or Dare. Maybe I've been the Evil Demon the whole time. Maybe I'm just reading into this too much.Hopefully, Blumhouse's Truth or Dare won't have the massive impact on pop culture that I worry about and Blumhouse will lose it's newfound reputation of champion of good films like Whiplash and Get Out and return to being that company responsible for the desert-like state of horror cinema today.