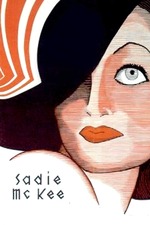 Part of the Joan Crawford: Queen of the Silver Screen Blogathon

When the classic psychological thriller Whatever Happened to Baby Jane? came to be filmed with Bette Davis and Joan Crawford in 1962, both actresses provided movie clips from their distant pasts for use in the film as examples of the acting styles/images of Baby Jane and Blanche Hudson. The examples of Baby Jane’s apparently bad acting came from two now relatively obscure early films in the filmography of Davis (Parachute Jumper and Ex-Lady) while the footage chosen to illustrate the glory days of Blanche Hudson, and by proxy Joan Crawford, came from Sadie McKee, filmed in 1934. It was an inspired choice for a number of reasons, for the film in question was not only a very typical vehicle for Crawford and a defining moment in the making of what would become her instantly recognizable star persona, but also one of the most well-made and enjoyable films from her days with Leo the Lion.

Joan’s career prior to 1934 had already been one filled with great shifts and changes, both in the kind of films she appeared in, her acting style and her own aesthetic. She had already come a long way from the quintessential flapper that F. Scott Fitzgerald described her as in the 1920s - during that period she had first burst into stardom with her energetic performance in Our Dancing Daughters (1928), and elements of that first image would survive until as late as 1930 in films like Montana Moon. But with her roles in Possessed and Dance, Fools, Dance (both 1931), she started to be identified with the working woman who fights her way into wealth and happiness - the fact that much of this was also not a far cry from her own life pre-MGM certainly helped too.

The opening scene of Sadie McKee is a good encapsulation of Joan’s star image as a whole - as Sadie walks towards the mansion where she works as a housemaid, one of the guests at the dinner, sighting her from a car, remarks of her “Look at that gorgeous creature! A thoroughbred, bless her! There’s no mistaking the aristocrat is there?”. The contrast between her social status and the kind of regal dignity she carries herself with is a theme in several other Crawford films from the same era, thinking also of the scene in Possessed ‘31 where the train passenger Marian follows to New York assesses her facial features and gives her advice on how to win the hearts of wealthy men. Her characters in these films begin from nothing but through unwavering pride, dramatic beauty and determination to “make good”, irrepressibly rise to win for themselves lives of luxury draped in sumptuous Adrian gowns. The feeling is always that their ascent to the top is as inevitable as Joan’s was in her own life.

She leaves the mansion for the city with her beau, Tommy (played by Gene Raymond), after a long scene in which she grows increasingly outraged at the disdain her employers hold for him, especially Michael Alderson (Franchot Tone) who admires Sadie himself and clearly has done for a long time. The squalid conditions in which the lovers live in and their own desperation to get ahead is at first overshadowed by their own intimacy and happiness at being together, such as when Tommy sings the film’s signature song “All I Do Is Dream of You” to Sadie as she prepares for bed. But as they begin to discover just how tough life is without any immediate prospects, their future together is quickly endangered.

Clarence Brown was the director on Sadie McKee, and although he’s become more obscure since the veneration of the auteur, he was one of MGM’s most reliable filmmakers when it came to women’s melodramas. As in Possessed ‘31 and Letty Lynton, as well as many of the films he directed starring Norma Shearer or Greta Garbo, he had a strong visual sense and each shot is given purpose. There are lots of memorable moments I could pick from - the cut to Sadie and Tommy’s eyes excitedly darting up and down before the camera pans out to show they’re hungrily looking in at food being prepared; or the various reprises of “All I Do Is Dream of You” in which it becomes more and more disconnected from Tommy and Sadie’s romance and is cheapened further and further until Tommy sights Sadie in the audience at one of his performances.

My favourites, however, are the scenes in the middle of the film where Sadie meets the wealthy Jack Brennan. Proudly refusing to go home after she is left alone by Tommy, she begins working as a dancer at a local dive where one night she is courted by the heavily inebriated Brennan; as it happens, Michael Alderson is also with him and desperately tries to prevent Sadie from “taking advantage” of the alcoholic. Sadie glances sideways only occasionally throughout the entire scene, largely fixing her eyes with burning vehemence on Michael as Brennan blathers on. A fade to black and much later in the night, with the bar now nearly empty and the chairs being stacked up, they’re still sat at the same table. The real life chemistry between Joan and Franchot is palpable throughout, this being shortly before they were to be married.

Joan Crawford’s performance as Sadie McKee is inspiring to watch, and even at this fairly early point in her career she had already begun to settle into being the Joan Crawford best known and loved by her fans. Decked in some of Adrian’s finest designs, her character faces off the men in the film who try to browbeat her reasoning that while “every gal has her price”, hers is high and she won’t be exploited. Faced with insinuations that she’s a gold digger and a chiseller, she responds with that same worldly half-smile she would give in so many films to come and doesn’t stoop to dignify the accusations. And when confronting Dolly Merrick at last near the end of the film, she gets the chance to deliver one of her many immortal one-liners - “Instead of thanking you, I could kill you and love it!”. She gets lots of close-ups throughout the film, the most memorable for me coming in the shot where she realizes Tommy isn’t in the bar with Dolly at the end and her face runs through a series of emotions as she realizes what is happening. Crawford’s origins in the silent era of film always served her well later on when she continued to be able to convey a great deal of expression without saying a word, and her beauty and intensity in this role and others makes her an almost hypnotizing presence on screen.

The overall themes of Sadie McKee as a film remain relevant in their commentary on marriage, poverty and the standards applied to men and women by society. Sadie is faced throughout the film with the choice between love or money and faces the highs and lows of both life in the slums and in high society. Through all her hardships and self-sacrifices she remains, as she is described in the film, the “honest working girl”.

Crawford, looking back on her career from a later vantage point, apparently described Sadie McKee as a film where everything went right - the direction from Clarence Brown, her own performance, the performances of her male co-stars and all the rest. While she was so often harsh and critical of her own best work, her own endorsement for Sadie McKee made it all the more perfect to review for the Joan Crawford Blogathon and a great film to get a feeling for what made Joan Crawford a name synonymous with the glamour, glitz and excellence of the old Hollywood.