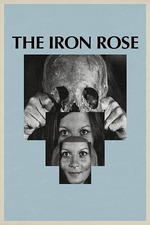 After so many films I think I can finally summarize just what it is that Rollin is doing in these movies that I find so enthralling - and it's that he's creating a cinema that's one of the purest distillations of a classical aesthetic of death and decay I know of. So many of the images he composes are drawn from a deep tradition, a kind of collective unconscious that he feeds on to inspire feelings of the sublime, to such a point that I sometimes feel like I’m reacting to something more like a painting than a film when trying to critically analyze these movies. He’s drawing from the French fantastique tradition and carrying on the style of silent horror but also the medieval danse macabre and the Romantic/Gothic - the last in particular is relevant here, because The Iron Rose might be one of the most complete evocations of the Gothic aesthetic I've ever seen. This is cinema’s equivalent of something like The Cure’s Disintegration or Joy Divison’s Closer, and so it was no surprise I was so into this.

The Iron Rose is a simple story on the face of it - it starts with a quickly rendered meet cute of sorts and an instant connection of the kind you’ve seen a million times in films, but this becomes strange when the boy (Hugues Quester) decides to take the girl (Francoise Pascal), for what I guess amounts to their first date, to the local cemetery. They spend so long there - hiding away to make love together in an open crypt for much of the time - that by the time they’re ready to leave the sun has already set and they suddenly find it impossible to find their way out of the cemetery. Seemingly it’s taken on new proportions in the night and they have become trapped, unable to find its end or edges. As one can imagine, our couple reacts to this with great anxiety - the girl in particular becomes terrified while her boyfriend becomes increasingly angry, aggressive and irrational.

This might sound a little similar to Bunuel’s classic The Exterminating Angel at first, but where that film used a gathering of the wealthy and titled trapped within the confines of their home to satirize bourgeois civilization and reveal its inner turbulence, Rollin’s concerns are wholly different. That Rollin is fascinated with death wasn’t a new revelation to me coming into this film, but this takes it to a whole new level. Here he’s made a horror film that has no antagonist - no zombies or vampires or any of the usual forces Rollin counterposes to life and to humanity, but instead the reality of mortality, decay and putrefaction. It’s no coincidence that our protagonists are a young couple in love - Rollin constantly contrasts their youth and vigour, as well as the carnality of their relationship (at one point having sex literally surrounded by piles of bones), with the death and morbidity all around them.

Something similar, too, with beauty. I’m reminded of the Mishima quote about how when one thinks of beauty one is confronting the darkest thoughts in the world, and I definitely think one of the of the things I find most enticing about the Gothic world is the way it fixates on decayed and weathered opulence and its ephemerality - whether that be neglected tombs and crypts, once great castles now falling to time and nature, or the vampire counts and countesses that Rollin would often portray in his own films, at once erotic and glamorous figures yet also devoid of the biological constraints and experiences of human existence. There’s several images like that here - the graveyard itself certainly counts, but also the image of luscious red roses engulfed in flames (contrasted with the eternal crystal/iron rose of the tomb, lifeless but evergreen) or Francoise raising an eroded and worn skull to cover her youthful and beautiful face.

Our main characters reactions as the night wears on are interesting - the boyfriend is, in his outlook on life, very materialistic and down to earth, conceding little ground to the possibility of an afterlife or of any significance in death, while Francoise - though more fearful at first - is decidedly more spiritual, eventually sinking into a kind of morbid fascination and becoming overtaken by sentiment. We get lots of expressive closeups of her face carrying various complex emotions and reactions, conveying her inner world and her ultimate acceptance of her fate with the same style as in a silent film. The long sequence of her dancing between the graves in the first light of gloomy, hazy morning, singing gently and with a gaiety that manages to be both childlike and unsettling, is really magical in particular but I really love the way she brings this character to life throughout the movie and makes you feel her whole transformation and mental journey in the space of one night.

Wonderful cinematography throughout, as I’ve probably already made clear - I can’t believe I watched this in old DVD quality because this is a film I need to see in Blu quality for sure - and as full of Rollin’s usual themes and atmosphere as ever; maybe more so in fact, as this is basically what happens when you remove plot and usual horror conflict in favour of pure mood piece. There’s the obligatory beach sequences which here serve as a kind of fantasy/utopian dimension removed from the setting of the film, charged with poetic narration and a vision of pure eroticism. There’s also a clown in this film yet again for a brief scene near the start... I don’t know what he symbolizes and he’s not of any direct relevance to the plot but he is terrifying even by clown standards and makes an already foreboding mood even more so - coulrophobics be warned.

This film can’t have cost too much considering the limited setting and cast, which amount for almost everything here… there’s otherwise a very minimally used score which is used to punctuate certain select moments, very effectively, but beyond that this is a great example of how to create a masterpiece with a threadbare budget. It’s an immediate entry into my favourite films of all time, and is one of the most unsettling horror films I’ve seen in spite - or maybe precisely because - of the fact it’s purely atmospheric. I can’t recommend it highly enough.