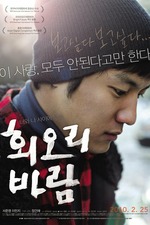 A really impressive film with a simple narrative premise increasingly punctured by bouts of abstraction. The film begins in equilibrium - love as a non-judgemental togetherness in the world. Jang Kun-jae orchestrates a beautiful shot on the idea. Tae-joon wanders between three different groups hanging round the train station to ask for money for a train ride back to Seoul, pretending that he has none, and the camera follows him around the space, while Mi-jung floats around the edge of the frame - not acting, but involved in the action. The scene therefore does not and cannot revolve around the question of Mi-jung’s feelings about what Tae-joon is doing, but instead expresses the sense that they are inevitably there with each other.

The film’s major theme is the end of first love, from Tae-joon’s perspective. The dramatic conceit is handled in a very odd way, in an absurd series of sequences in which the lovers families gather to forbid their meeting. In contrast to the placid, open introduction there is a jarring sense of violence to the social constraints, picked up again when the film temporarily moves from Tae-joon’s perspective to show a Pialatian family spat between Mi-jung and her sister. Though we only see glimpses of it because Tae-joon is, generally speaking, a loner, there is a sense of neuroses to the social body.

The dazzling thing about the film is the depth and seriousness with which Jang Kun-jae’s imagines an endless ending to love. The film suggests a traditional narrative line, with Tae-joon aiming to get into college so that Mi-jung’s parents might accept him again. Dramatically speaking, either Tae-joon succeeds and the film ends happily, or Tae-joon fails and the film ends in tragedy, or in keeping with a realistic register Tae-joon fails and then life marches on. We see him drop out of school, with the aim to work and study full time. He rides his bike around the city doing deliveries. Mi-jung eventually admits she thinks they should just give things up, which is in keeping with the films general realist register - the decision is not dictated so much by psychological cause and effect as time’s slow working. The end of the film’s narrative line comes with a burst of action, Tae-joon speeding, attempting to run a red light and hitting an old man. In keeping with the film’s realist register things go back to normal, and Tae-joon goes back to school. Having exhausted the world of action, cause and effect, narrative, the film enters into abstraction. The camera floats with Tae-joon’s humming, entirely subjective, shows his memories and eventually leaves him to jump forward to Mi-jung in a nondescript gym class, which also leads us back towards the past. As Jang shows events only tangentially related to the film’s major theme, a sense of mystery is restored to the characters, and the realist’s contention that time marches on is replaced by the artist’s question of how the past echoes ceaselessly in the present.