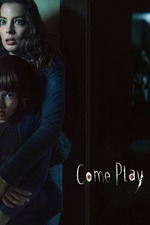 This film interestingly almost feels like an inversion of modern horror, in that most studios find themselves completely reliant on good concepts and end up with a movie that is devoid of any cinematic value. Come Play, on the other hand, with its Hurr bUrrr technology bad premise and often-cringey dialogue, finds its biggest point of redemption is how well-directed it is.

While there are quite a few jump scares, none of them necessarily feel cheap or unwarranted, and on many occasions did I feel like the way that certain information is presented is very intelligent. Much of this film is handled with a level of control that feels beyond its other elements, and the result is something that is genuinely engaging. It's well shot, paced competently, edited with intention, and while the "Demon appearing through AR" gimmick gets old quickly (and is a little tired to begin with), I found myself being won over by this.

Although this ends up being pretty middle-of-the-road in a macro sense, I think it exists as a testament to what having a good director can do for a film. As a first feature, this is something to be proud of, and I'm excited to see more from Jacob Chase, as there seems to be a lot of promise in his skills behind the camera.