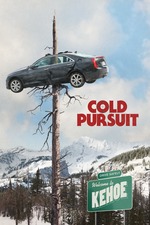 The picture in the poster I see as I'm typing this kinda explains everything. It's like Fargo, although I never saw the movie just a few episodes on TV. Honestly, I think this was something somewhat good in theory but when it got to editing somebody missed the post-it note stating to cut out all unnecessary stuff and make the time frame more enjoyable. Wow was this thing is long! I didn't realize this until I got back into my car with my dad who even said "what the hell was that?"

Who is the better quarterback? Elway or Manning? (No seriously, that was a question they asked in a movie with drugs and violence.)

Liam Neeson, is turning into a Clint Eastwood type of actor minus the age apperance. He just kinda stands there, says very little, stares off into the distance and does the bare minimum. Yet, it works! The wife was from Jurassic Park, the son I don't know and you only see both of them for a total of about 10 minutes. Unnecessary things which I won't mention could have "Taken" this 1 hour and 58 minute film down to about 1 hour and 10 minutes..... yeah.

So what started out as Kraftidioten starring Stellan Skarsgård was then turned into Cold Pursuit and I don't exactly recommend it to anyone unless your that bored.

The half of a star is for the Indian who went parachute skydiving, landed into a snow blower truck and got chopped up into a million little pieces with seconds to go before credits.