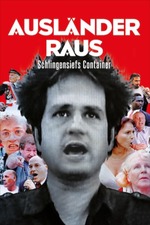 a really amazing documentary about a deeply complicated and interesting work of art that contains so many multitudes i can't even begin to describe them all here. i came upon this film through 'artificial hells' by claire bishop, a book tracing the history of participatory art which ended on this piece.

after a right wing politician gains power in austria, artist christoph schlingensief stages a group of refugees in a shipping container in a "big brother" style live broadcast where they are voted to be 'deported' (though the refugees are real, this is all mock- they're initially pulled from a detainment center outside of vienna where they return at the end of the piece) by the public every night. the ensuing chaos is fucking batshit the only comparable that comes to mind are the final 30 minutes of darren arrenofsky's "mother!" if it was a partisan political debate happening in real life in the middle of a public square outside of an opera.

i had to pause this movie half way through and go for a walk and get an ice cream because it gave me a panic attack over the commodification of human beings. it's also extremely prescient for 2020 american politics.