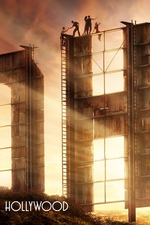 Although Ryan Murphy’s seven-part miniseries were overly cheesy and utopian on its attempt to write an alternative version of Hollywood’s “golden era”, and despite the mixed reception the series had, I actually liked it.

Hollywood provides a much-needed escpaism in these difficult times we’re facing. It is glamorous, lighthearted and positive in a way that only Murphy, with his theatricality and heartwarming compassion for outsiders, could.

Much like what Quentin Tarantino did in Once Upon a Time... in Hollywood, Murphy blends actual history with his widely revisionist view of what Hollywood would look like if its unfair systems, power dynamics and prejudices against race, gender and sexuality had been dismantled seven decades ago.

The self-reflexive narrative here is the strongest point of the series, making it aware of its nature in order to question the process of filmmaking. What Ryan Murphy strives to do here is what his characters are doing with the production of Meg, showing on screen people who were not allowed to be who they were in the late 40s.

On the other hand, Hollywood’s narrative is sometimes sloppy and simple-minded. Murphy’s story can be seen as a suggestion that systemic racism and homophobia in Hollywood existed because marginalized people did not tried hard enough to stop it. The over sexualized scenes also bothered me. I thought it was a little bit careless to approach sexual abuse and workplace harassment in Hollywood just like that.

But well, it was good to imagine the Hollywood classics so representative. We know in real life we are far from that perfect dreamland ending the story come up with, but after Parasite’s achievement and the moment we are leaving in, Hollywood was an easy series to watch. Ryan Murphy has created some of the best takes on acceptance that have been on TV in the last two decades. I really dig into his work.