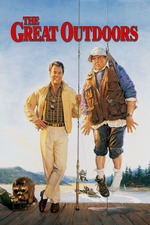 John Candy and Dan Aykroyd together in a John Hughes 80's camping comedy is the recipe for hilariousness, except it's not really full of gutbusting guffaws, just a few smirks here and there.

It's definitely second tier John Hughes, first tier being Planes, Trains and Automobiles. Second tier John Hughes is still better than most other movies out there. I like to think of a movie like The Great Outdoors as movie comfort food, not necessarily good for you, but makes you happy anyway.

The water skiing scene is a comedy highlight. So is the bear in the cabin scene. Love those subtitled raccoons!