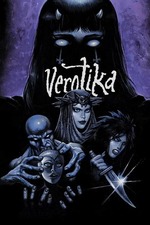 This was so bad that an oral history will one day be published about all the events leading up to its premiere ... Someone will go back and investigate the people responsible for this disaster, CHERNOBYL-style‬

‪My account of the night is as follows: ‬

‪6:53pm: The theater is packed. About 500 people, possibly more, all seated for the world premiere of Danzigs debut film.

‪7:12pm: It’s announced that the film is running late. Not the best sign, but not out of the ordinary for a world premiere‬

‪7:41pm: Danzig walks onstage to introduce the film. He talks about his vision and how long the road has been to get to this moment. He then attempts to set up the film and give the audience context, but reader, there was no preparing us‬.

‪7:48pm: Almost an hour late to a packed house, it begins ‬

‪8:30pm: About 1/2 through, many audience members seem to have the same idea, they need more beer ‬

‪8:36pm: The once confused audience appears to agree: we should’ve brought plastic spoons‬

‪8:36-9:29pm: The film is barely audible over the roaring laughter of the audience and endless psssk!’s of beer cans opening ‬

‪Prior to the movie, Danzig boasted about the gore that allegedly wowed effects gurus‬

‪(There were maybe 3 notable moments of gore that might have been ketchup at times, fruit punch at others)‬

‪He also mentioned how the film isn’t concerned with 20 minute long shots at the beach with no dialogue “like all that Hollywood bullshit”.‬

‪But 20 minute sequences of sloppily edited, rapidly-cut footage of naked ladies in a strip club with no dialogue? Very concerned with that apparently!

‪If there is ever a Disaster Artist 2, it will be about this night. (He even looks like Wiseau!) I no doubt just witnessed history. There was a Q&A after, where he explained the film’s setting, which features signs that CLEARLY say Los Angeles, “yeah that was supposed to be Paris”. At this point, I’m well past dead. I’m just a puddle in what was once a theater chair, now consumed by my own cringe implosion.

Another quote: “I wouldn’t have laughed at some of the parts that you guys did.”
*gulp*

‪On my way out, although I did everything I could to avoid it, I crossed paths with Danzig whose entourage now featured 2 CPD officers in addition to a bodyguard. Briefly, I thought I was gonna be roughed up for laughing. Instead, I scooched by while saying, “ssscuze me”. No eye contact, obviously‬

I truly hope the world will one day see this film. But we need to know the truth behind what went down. ‪These, gentleman, these are the cost of boob-eyes.

6/15 Edit:
Would like to say I think Danzig should be proud that he made a movie. I haven’t. No matter how unintentionally hilarious it was, that was easily the most fun I’ve had at the movies in years. And Endgame came out mere months ago.

Also his exact quote was more along the lines of “you didn’t laugh at the same parts I would, but that’s cool” so he doesn’t seem too bad a sport on the subject. In his defense, he did say this was not a Hollywood movie and he was not kidding.

Apparently it’s scheduled to screen at a few more festivals this summer. My only advice: Pack the theater and be plenty tipsy by the time the opening credits roll, it’s an experience.