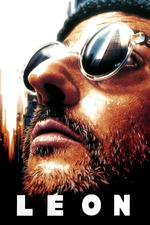 It's a little strange that I had never watched this before. A violent '90s action thriller with acclaimed performances? Seems like something that should have been a big part of my teenage years. But Léon was perhaps also a film I'd long avoided. I've always known it was Natalie Portman's film debut, it had an unhinged Gary Oldman and it had some strange relationship between a young girl and adult hitman.

I also knew that I wasn't a fan of any other Luc Besson film I'd seen, and at some point when younger I had been flicking TV channels and seen the family massacre scene. It was a bit much for me to take back then and I found it quite disturbing, so turned it off.

But seeing it now I found Léon to be quite a delight for the most part. It's a darkly violent thriller, yes, but it has a naïve charm to it and an off-kilter sensibility that marks it as quite unique. It's got a European flavour, somewhat unsurprisingly, and New York doesn't really feel like the same city as it does in other films. Natalie Portman is very strong in her first role and it was a film that required a lot of her (with a question of perhaps whether someone this young should have done this). Jean Reno plays the lead role with an almost childlike quality of his own and it works. I'm not sure we ever get to understand him, but we definitely come to like him.

Gary Oldman is also great here, in a completely over-the-top way. There's nothing subtle or nuanced about what he does but it suits things just fine. He's turned up to 11 the whole time and makes for an effectively terrifying antagonist. You get the sense he could literally do anything he wants at any point.

In other areas this approach doesn't work as well. Across the film the performances are cartoonish and peculiar. Everything is exaggerated and it became surprisingly tiring as I kept thinking a more subtle approach would be so much better. Again, it feels like a European's idea of what Americans should be like and that everyone is doing an impression.

I also struggled with the central relationship between Léon and Mathilda which ventures into uncomfortable, icky territory. Not to mention the whole concept of a 12 year old girl becoming a contract killer and having someone willingly help her to do that. There were some deeper psychological avenues which were ripe for exploration here, but the film goes for explosive violence each time. This makes for a highly entertaining watch overall, but one that maybe left me feeling a bit unpleasant. Just like the grimy homes that everyone seems to live in here.