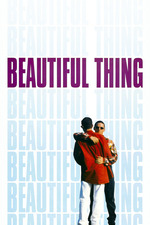 I really liked the location of where this film took place - the architecture, the canals, the wide walkways. I've actually seen this place before. Took me awhile to realised it's Thamesmead, the same place Misfits (2009) tv show was filmed in. That was a nice surprise.

Linda Henry's lines were incredibly funny. But the scene that had me in bits was when Tony was backing up his VW without noticing that behind him was a lady walking her dog and they had to walk up a tiny hill to avoid being hit by him. It was only a 3 second shot but I had to pause the film to collect myself.

Quite refreshing to see a coming-out film that doesn't end with the characters leaving home and forging their own way to live their authentic lives. Having supportive friends and family are equally important narratives that need to be shown. It doesn't always have to be dark and violent. Sometimes, it can be a beautiful thing.