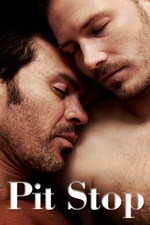 Sometimes movies are incredibly clear in their intentions from the outset. Other films take their time, sneaking up on you and subtly creeping into your consciousness. and there are those films that sneak up on you, creeping into your consciousness. Pit Stop, an eloquent look at gay men living in Texas and the crossroads they find themselves at in their interactions, is most definitely the latter. While I had some problems with the first half of the film, the 2nd half is so wonderful that it made me reevaluate my entire experience. Anchored by some nuanced performances and a character driven screenplay, the film manages to say a lot without speaking loudly.

It’s amazing the kind of trance a movie can put you in when it’s more calm about it’s intentions. I didn’t even realize where the story would take me till the very end, and it’s only now after thinking about it that I notice the small things that made it such an enjoyable watch. The majority of Pit Stop is set in close confines, rooms, movie theaters, cars, all of which amplify the aesthetic of how repressed the characters feel. This is a film about trying to find happiness in the murky waters of societal and personal acceptance. Each character has a struggle. Gabe (Bill Heck) is a contractor reeling from his breakup and finds solace in being a good father to his daughter and a good friend to his ex-wife. Ernesto (Marcus DeAnda), having broken up with his live-in boyfriend is adrift amidst the fact that his previous lover is in a coma. Gabe’s wife Shannon (Amy Seimetz), is seeking the kind of romantic love she had with Gabe, but doesn’t know the correct way to go about getting it. These are complicated existences, rife with drama and laughter and hope amid the difficulties of living in a small town.

The performances in this film run the full gamut of emotions, but I was amazed at just how natural they felt. It’s one thing to play a small town person, but to radiate the character’s humanity without judgement is another thing entirely. Of all the good performances, Bill Heck’s incredibly rich turn as Gabe really stood out for me. It’s in the small details, the cracks in his voice when talking to his ex-boyfriend on the phone, the barely contained excitement after him and Ernesto hook up, and the almost childlike . I love when actors can amplify basic human emotions in fascinatingly nuanced ways and Heck really does a great job with his role.

The script, written by director Yen Tan and David Lowery, is very poignant and relies more on character beats than louder societal commentary. It’s for that reason that the film struggles out of the gate, taking longer than I expected to settle you in its rhythms. While I enjoyed how hemmed in the film felt, I do feel like there was an opportunity for some large social commentary by opening the story up more. I would have loved to see how the characters would have acted in large social gatherings or bigger places. However, all the problems of the script are just obliterated by a final 20 mins that are so perfect I wouldn’t have minded 20 minutes more of seeing where the characters would go from where they ended up. That’s a tough thing to accomplish, but when you’ve created characters that are so interesting to watch and given them real world motivations, it’s no surprise that a film like Pit Stop makes you yearn for more.