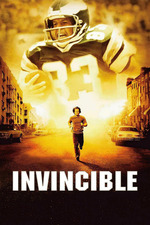 I did not know this was a Disney film when going into this. Nonetheless it was an enjoyable film even though it was a story we have all seen plenty of time. but regardless the film was still enjoyable where the story beats where relatively handled well in this film. I liked the use of coloring in this film to showcase the 70"s style or atmosphere. The characters were all intriguing and enjoyable to watch.

Out of all the actors I did feel like for some reason Mark Wahlberg felt stiff or not at the same level compared to the other actors. A scene that really showed this was when he was suppose to show frustration at the fact his wife left him and took everything. that moment did not feel well acted. This could simply be due to the fact this was in the earlier years of his acting. Besides that I felt like the story only revolved around him getting into the NFL, I was hoping there would be more to it. Of course I understand this is based on a true story and they are limited in where they could take the story to.

Overall Mark Wahlberg did ok, and the story was a fun. Regardless it is a fun watch at home where you will enjoy sports underdog story. In the words of Mark Wahlberg,
Say hi to ya mada for me!