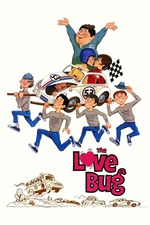 This was such a fave as a kid, I used to watch it a lot, but hadn't seen it since I was about 12 which made this one of those fascinating rewatches where everything was forgotten-yet-familiar?

I could definitely do without all of the racial stereotyping/outright racism in the last act, but it's amazing how successful every single other element of this movie is. The editing is propulsive, the shenanigans are surprisingly hilarious, the drama is...very dramatic but I actually got emotionally involved??? This movie really makes you care about the sentient (and quite frankly unstable) car!

Robert Stevenson directed so many of these live-action Disney movies, and often is viewed as an anonymous workman kind of slumming it, but I think he deserves a LOT more credit than he gets-- stitching together all this rear-projection and stunt-driving footage into a totally coherent and even exciting/hilarious/compelling final product, and hopping between so many genres and tones from film to film...the guy was talented and it's time people started admitting it.

The real MVPs besides Herbie: the matte painters with those gorgeous San Francisco vistas, the old guy down in the mine who doesn't notice all the cars driving through, and THAT BEAR most of all. He got to go on a joyride!!