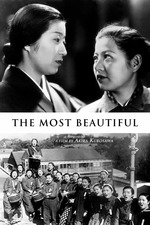 Kurosawa's studio-mandated WWII propaganda film proves to be surprisingly intimate, human, and stealthily critical of the institutions it supposedly praises.

This is the first film when he began to use techniques to contribute to the emotional realism and veracity of a story, shooting in deeply intimate close-ups, filming in a real factory, and having the cast live where the characters do for the duration of filming. The results are excellent, and the story attains a kind of weight and maturity over its running time that I would never have expected.

The narrative builds gradually, starting with a throng of women all acting as a homogenous whole, working on behalf of the state; as the film goes on, individuals come into ever-more poignant focus. At the same time, the narrow environment of the film begins to expand: most of the film takes place in the factory and the compound surrounding it, but in the last act we are reminded that the outside world is still very real-- first with a majestic establishing shot, and then a detour into the snowy Japanese countryside. These detours only make the film's ending more heartbreaking-- at the end of the day, the protagonists have been indoctrinated into a belief that productivity is important above all, and their hearts cry out under the strain.