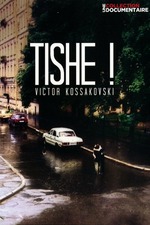 The ultimate lockdown film made before the lockdown.

Victor Kossakovsky’s film Tishe! (translation: ‘Hush!’) opens with a particular image, a blurry black-and-white photograph that doesn’t resemble a whole lot if you don’t know its origins. The image in question is the oldest surviving photograph ‘View from a Window at Le Gras’ made somewhere in 1826 or 1827. It’s a striking image with a certain mythological quality to it because of its historical value. For Kossakovsky it was one source of inspiration for his 2003 film.

In it he has placed himself in the same spot as the iconic picture, behind the window of his apartment, looking out unto the streets of Saint Petersburg as the city prepares itself for its 300th anniversary. Yet, the film doesn’t have a true narrative and instead is made up of hundreds of little moments. Kossakovsky focuses as much on the people on the streets – walking around, drunk or sober, with or without a dog – as he does on the non-human elements. Animals of all kinds frequently take center stage. A pigeon in front of his window has its very own scene. We get a shot of a spider’s web filled with dewdrops. But nature is perhaps the most recurring element of all. Whether it’s rain, snow, or simply the air that surrounds us (given a visual appearance through the addition of dust or fumes from an exhaust pipe), they are the forces that give life to Kossakovsky’s poetic masterpiece. But not without getting into tough confrontations with the humans or the animals of this small little street.

One of the only recurring elements that one could consider a story arc within the film, is the construction of a piece of the road in front of Kossakovsky’s apartment. What starts with a short cut and a quick fix, soon turns into a year-long struggle to create a nice flat road. Kossakovsky, aware of the ridiculousness of this simple task spun way out of control, speeds up the images and creates a kind of slapstick adventure reminiscent of classic silent comedies. The street slowly fills with an enormous pile of rubble and an even greater hole next to it, eventually turning into a streetwide catastrophy.

It is but one of many of the sometimes hilarious, sometimes touching things Kossakovsky captured during his year-long quest of looking out his window. Now, on the brink of the pandemic coming to an end, it may show itself to be perhaps the finest work of lockdown fiction despite being made long before covid-19 even came into existence. Kossakovsky, whether stuck in his room unwillingly or on his own accord, created a document on the search for inspiration and stories to be told, when little else is going on in your life. He finds a strange, almost abstract form of entertainment in watching raindrops hit a cracked road in the middle of the night, or snowflakes dancing in the wind with nothing but a dirty yellow streetlight to pull them out of the nightly darkness. And even though the image quality is poor by today's standards, the film’s contents are anything but. They present a rough, unfiltered view of life on the streets (or on one street at least) where despite nothing being expected to happen, practically everything can. And that simple conclusion might give an answer to how we, just like Kossakovsky back then, pulled ourselves through these many months of loneliness and boredom; by opening up our eyes to look and analyze the most mundane things and find pleasure and entertainment in the smallest of things. The man probably said it best himself when describing this film: “We don't normally look at things that are right in front of us. In a way, this is an example of what can evolve in front of your eyes if you care to look.”