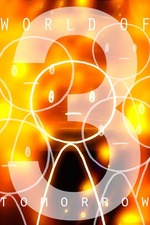 It should be rather clear by now that Don Hertzfeldt is one of the new millennium’s brightest cinematic wonders. More a self-made man than most people could call themselves, the guy drew his way from oddball animation student to two-time Oscar nominee, responsible for one of the greatest ongoing science-fiction sagas ever made (Star Trek, Star Wars, beware!). Now with his third installment in the World of Tomorrow series, he revisits his complex, borderline psychedelic universe while doubling down on the casual wisdom his characters share and, more importantly, the mind-bending ways in which they share them. It was said of the first installment back in 2015 but we can still say it now: Hertzfeldt puts out more ideas in a handful of minutes than most directors in their entire career.

At this point then the series isn’t even so much about the plot anymore as it is about the almost Borgesian structure of its narrative where we aren’t just talking about clones of clones of clones, each of them having their own little time travel adventures, but we are also presented with clones traveling in a dimension “in-between time” where they quietly kill members of society while invisible to the human eye. Of course, the plot isn’t entirely out the window but it has taken on a form that has become synonymous with Hertzfeldt’s style.

The film opens with the titular David Prime as he floats through the vastness of space (somehow presented in a deceivingly epic and grand manner considering the animation format). There he encounters an unknown memory in the depth of his mind which is loaded with random skills he’s bought. It appears to be a message of one of Emily’s clones, which she gave him when he was a little boy. Before David is well aware of his precise place in the universe, he is sent out into the depths of space to uncover the rest of Emily’s messages, which sent him on a quest through his own life and that of many of his clones to… well, to do God knows what. The plot becomes convoluted quite quickly but it is exactly there that the joy of Hertzfeldt’s new masterpiece comes to light. Drunk on the infinite possibilities of his creation he is now playing god with his little stick figures, creating an ever-growing puzzle of life and death around them. Along the way, he keeps dropping the usual existential philosophies that keep these short animated films apart from all the rest. As Hertzfeldt and Emily and David expand into the future, creating infinite new paths, with numerous more stories to tell, we can rest assured that even a hellish year like 2020 can’t defeat all the boundless creativity that exists in one man, let alone the entire universe.