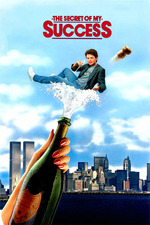 The Secret of My Success

Hard to dislike Michael J Fox: he's so earnest and desperate to please. Having said that, a cute smile and a solid work ethic will only get you so far and by the end of this fairly daft film, like an annoying neighbour, he had seriously worn out his welcome. The movie had a serious flaw at his narrative heart in that Fox's persona is nice and personable, yet the world he works in is notoriously rapacious with long hours and a cut-throat attitude de rigeur. The film's solution to this 'square peg, round hole' quandary is to have all the main characters as buffoons, which then lands the film squarely in the world of cartoons. Most frustrating of all, with such a subject ripe for parody and social comment, the film had nothing to say. If you want a far better movie on this subject stick to the film's clever twin, released in the same year, Wall Street.

The Terrorist Next Door