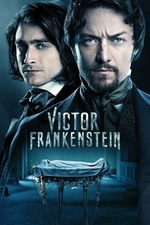 Yet another entry in the class of movies that don't necessarily have extremely glaring flaws that one could pick apart for days, but commits the even graver sin of just being pretty boring. I put that down to not spending enough time in the parts of the story where the characters would be developed, mostly. For example, the beginning of the movie is a whirlwind through the circus, barely touching on anything deeper than introducing Igor as a hunchback clown physician (immediately rendered irrelevant after he leaves) and, to even more minor extents, Lorelei and Victor. In fact, the movie drags on in places where we're learning the least about people, such as towards the end with the drawn out section where Igor learns about Victor's motivations or the entire fight sequence with the monster. Scenes like those felt like they went on for ages.

James McAvoy handled himself well as a man on the brink throughout the movie, delivering the more manic lines with the proper amount of sincerity. Radcliffe was fine, but I actively disliked the direction of his character and his coming to see himself as a "creation," meaning he essentially went nowhere from his beginnings in the circus but now he has a nice haircut and shave that he suddenly knew how to do with no help.

...And what the hell was with using that bland title card instead of having Victor say his name?